Accessibility links
Mortgage Delinquencies Rise To Highest Level On Record : Planet Money Mortgage delinquencies are up to 9.24 percent of total mortgages -- the highest number on record. 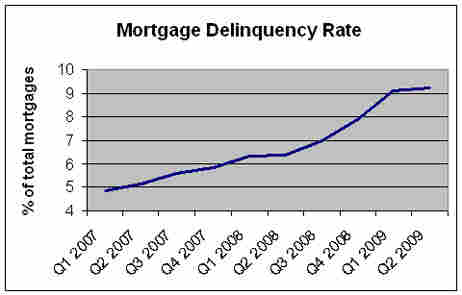 The number of mortgages with overdue payments rose to a seasonally-adjusted 9.24 percent of total mortgages in the second quarter of 2009, according to today's Mortgage Bankers Association National Delinquency Survey. That's the highest it's ever been since the MBA began keeping records in 1972. The figure is up from Q1's figure of 9.12 percent, and up nearly from 6.41 percent last year.

But what's scariest isn't the numbers, it's that the increases are no longer being driven by subprime loans. Instead, they're being caused by unemployment. From the report:

While the rate of new foreclosures started was essentially unchanged from last quarter's record high, there was a major drop in foreclosures on subprime ARM loans. The drop, however, was offset by increases in the foreclosure rates on the other types of loans, with prime fixed-rate loans having the biggest increase. As a sign that mortgage performance is once again being driven by unemployment, prime fixed-rate loans now account for one in three foreclosure starts. A year ago they accounted for one in five.