Accessibility links
Unemployment Takes Surprising Dip: Falls To 9.4 Percent : Planet Money The Bureau of Labor Statistics released its latest report on employment in America, and it shows the first drop in months.

Unemployment fell to 9.4 percent in July, the Bureau of Labor Statistics reports. That's down .1 percent over the June rate of 9.5 percent. Economists had expected the number to increase by .1 or .2 percent. It's the first decrease in 15 months.

UPDATE: President Obama's spokesperson Robert Gibbs told reporters this report "is more evidence that we have pulled back from the edge and away from the brink of a depression." He added, "The pace of job loss is declining and that's positive, but no one loses sight of the fact that last month a quarter million people lost their jobs." Gibbs said the president still expects the jobless rate will hit 10 percent later this year.

All told, 14.5 million people were unemployed. Employers last month shed 247,000 nonfarm jobs last month. The average monthly job loss for May through July was 331,000, about half the rate of 645,000 from November through April. Since the beginning of the recession, 6.7 million jobs have been lost.

The broadest measure of unemployment -- U6, which includes discouraged workers and those working part-time because all they can get -- hit 16.3 percent. That's down from 16.5 percent in June. We've got a chart after the jump.

As the unemployment rate has risen, wages have all but stagnated. By contrast, today's report finds hourly wages rising to $18.56, after being flat for May and June.

After the jump, a look at the broadest measure of unemployment.

Often called the underemployment rate, U6 combines the count of people who've been laid off and are looking for work with those who have given up or resorted to part-time jobs. 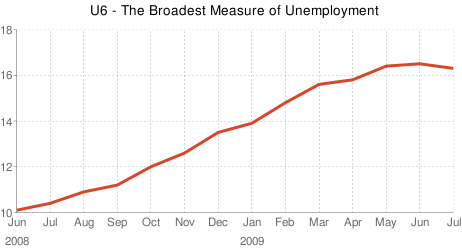