Accessibility links
Brooklyn Artists Propose Local Currency : Planet Money A group of artists and activists in Brooklyn are trying to set up community based currency. 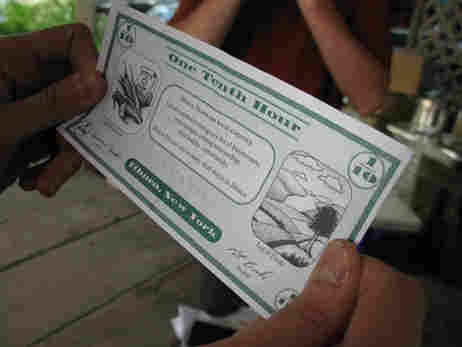 How's this for financial innovation? A group of artists in North Brooklyn is trying to develop a local Brooklyn currency -- the Brooklyn Torch -- that's meant to encourage locals to spend within the community, and boost local pride.

Turns out, local currencies are not only legal, they already exist in places like Madison, Wisc. and Ithaca, NY. Since we no longer back up money with the gold, notes only have to be declared to be money by an authority. The U.S. dollar is backed by the U.S. government, and the Ithaca Hour is backed up by the Circulation Committee of Ithaca HOURS, Inc.

Community businesses can sign on to use the currency, and in return are listed in a directory that will (hopefully) increase their customer base. In Ithaca, joining up also makes businesses eligible to take out loans (in Hours) with no interest. Employees working for those companies can choose to have some or all of their wages paid in alternative currency instead of dollars.

Right now, the Brooklyn Torch is in its infancy. They're still looking for someone to design the currency itself, and a VIP's face to put in the center of each note. My nomination goes to our very own money-guru (and Brooklyn resident) Adam Davidson.