Accessibility links
Podcast: Planet Money Survives First Year (Anniversary Edition) : Planet Money On today's Planet Money, Adam Davidson and Alex Blumberg remember the project they meant to start and the global economic crisis that pushed that dream back for a while.

Bracing for it in September 2008. Paul Ellis/AFP/Getty hide caption

Adam Davidson and Alex Blumberg spent the summer of 2008 working on the story that would launch Planet Money -- a Chana Joffe-Walt report about the connection between Chinese windmills and U.S. airplanes.

But a funny thing happened on the way to that first feature: in a terrifying series of financial calamities last September, the global economy darned near died.

What began as the month we all started thinking about Too Big Too Fail turned into Planet Money's first crazy, crazy year. You were there. Celebrate it with us in this anniversary podcast. 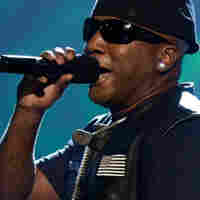 In August 2008, Young Jeezy told you to dial it back. Kevin Winter/Getty Images hide caption

Never mind former Sen. Phil Gramm's "mental recession." Rapper Young Jeezy is titling his next album Recession -- and he does mean the economic variety. He got out in the streets for this one, posting a YouTube report looking at families on the lower rungs (warning: plenty of profanity).

Economists continue to debate whether the U.S. is a recession, but Young Jeezy says he has never seen the economy this bad. In an interview with XXL, Jeezy acknowledges his own change of heart about the financial scene. "When money was plentiful, I was the first one who told you to stack it. Live your life with it," he says. "Now that money slowed up, I'ma be the one telling you to save it like they ain't gon' make it no more."

P.S. The National Bureau of Economic Research got around to confirming Young Jeezy's position on Dec. 1, 2008, when it announced the U.S. had been in recession for a year.

If you're interested in evolution, the first two have no opening music. The third and fourth feature Marnie Stern's "Every Single Line Means Something," and the calm music is Elizabeth Mitchell's cover of "Three Little Birds." And if you're looking for more back issues, try Odeo.