Accessibility links
Coins For Hard Times: Artist Makes His Own Money : Planet Money Artist Matthew Hincman designed his own currency and minted 1,200 of them in copper. He'll be leaving them in random places for people to find and puzzle over.

Coins For Hard Times: Artist Makes His Own Money

Coins For Hard Times: Artist Makes His Own Money 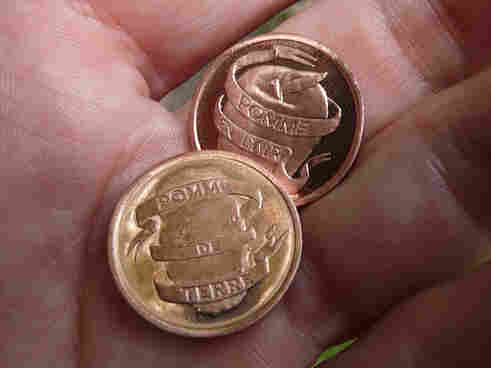 I ran into artist Matthew Hincman last week, who has decided that things have gotten bad enough that it's time to create your own money.

Hincman designed the coin above and had 1,200 minted in copper, which he plans to leave on the ground at random locations for people to pick up and puzzle over.

He says he modeled the coins after the Hard Times Tokens that circulated in the 1800's, many of them satirical.

Hincman has no plans to control the money supply at large.

In fact, he's trying to stay out of trouble. For one recent project, he installed an unusual version of the standard park bench -- it was impounded by the authorities, though they liked it so much, it's now back in place.

Hincman figures there's no law against leaving coins around. He says sometimes drops to one knee and pretends to be tying his shoe, then casually deposits one on the sidewalk.