Accessibility links
Unemployment Continues Stubborn Climb To 9.8 Percent : Planet Money Employers in September cut 263,000 jobs, many more than the predicted 180,000 and up significantly from the 216,000 jobs cut in August. Unemployment is now at its highest since June 1983.

Unemployment rose to 9.8 percent in September, the Bureau of Labor Statistics reports. That's up a tick from the August rate of 9.7 percent. It's also the figure projected by economists in a Thomson Reuters survey. (Planet Money listeners predicted a rise to 9.9 percent).

The ranks of the unemployed now include 15.1 million people in the U.S., up 7.6 million since the start of the recession in December 2007.

The broadest measure of unemployment -- U6, which includes discouraged workers and those working part-time because all they can get -- hit 17 percent. That's up 0.2 percent from 16.8 percent in August, a bigger climb than in the headline number.

After the jump, a look at the broadest measure of unemployment.

Often called the underemployment rate, U6 combines the count of people who've been laid off and are looking for work with those who have given up or resorted to part-time jobs. 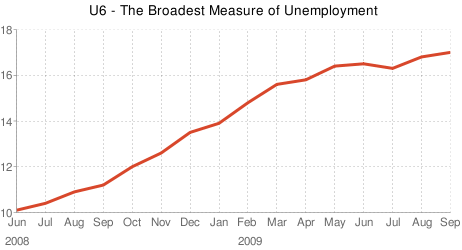 The government's broadest measure of unemployment, U6, jumped by more than the headline rate. Source: Bureau of Labor Statistics hide caption