Accessibility links
R.I.P. Payday Loans? : Planet Money The FDIC launched a pilot program last year to try to convince banks to provide small-dollar loans of under $2,500. So far, they say it's been a success. 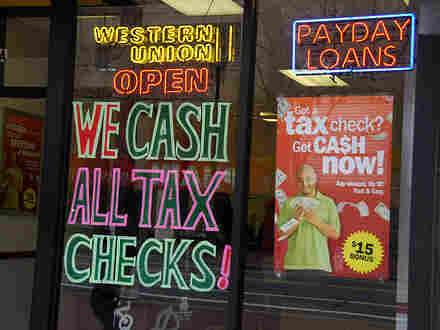 Payday loans, also known as payday cash advances, remain a hugely controversial and profitable business. In recent years, several states have imposed strict usury limits on the interest pay day loan companies take, some as high as 400 percent on an annual basis. People who resort to payday lending are typically low-income workers with few assets, and the loans often have the effect of depleting the assets of low-income communities.

Last year, the Federal Deposit Insurance Corp. began offering banks incentives to offer short-term, small-dollar loans of up to $2,500 to low-income Americans to help those with low or no credit scores get access to regular banking outside of the 23,000 pay day loan outlets nationwide.

According to an interim FDIC report, the pilot program appears to be a success and federal officials have announced they plan to expand the program next year. So far, 31 initial banks collectively have offered $28 million in loans up to $2,500. About 8 percent of customers were delinquent, roughly the industry average.