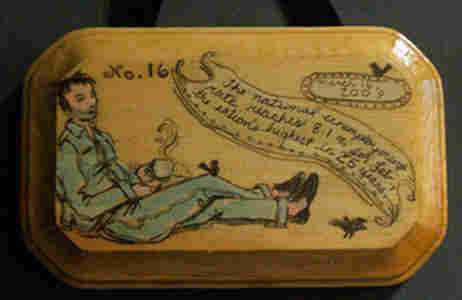 Lori Nelson says a visit from Alex Blumberg and Adam Davidson to her children's school in Brooklyn inspired her to illustrate landmarks of the recession:

Since I am from a long line of Mormon crafters, I decided to illustrate each significant moment of the first year of the Recession on a highly lacquered, tiny, carved pine plaque. With around 24 points of importance, this group of souvenirs became something I hadn't anticipated. Individually, each plaque was pretty and precious. Hung together, these plaques took on the aspect of a jumbled mass-grave.

Initially, I showed the group of plaques under the name, "Souvenirs From the Recession" in a pop-up exhibit in a defunct Brooklyn factory with a group called Recession Arts. I think the piece actually helped people see how messy the last year was, but also perhaps helped people understand each crazy point of those early Recession days. This alone could have been pretty fulfilling, however, the project took an unplanned turn and I realized then that I was only starting with these souvenirs.

I happened to have a few manila cards on me. As I hung the plaques, I reached out to fellow artists, asking them to contribute a few lines about how the Recession had personally affected them. I also texted everyone I knew asking them the same thing. The responses were sometimes predictable ("Eat out only once per month as opposed to once per week"), sometimes quirky and surprising ("The idea of a family project is making our own laundry soap,") and sometimes really sad ("My mother died. Her debts became too overwhelming...."). With a handful of these personal "souvenirs" scattered among the factual plaques, the piece was hung, show opened, and project switched up.

I have now changed what I am memorializing on the pine plaques. I gather one- or two-line stories from friends, Craigslist, and Facebook describing what people as individuals are feeling and seeing during these new Hard Times. In the tradition of Studs Terkel, I feel compelled to document this important time in history so that people can understand how it is and maybe learn. The numbers are interesting and I will continue to create plaques for the important data of the Recession, but I have switched the focus of my project to the humans. One Hundred Little Recession Stories is at about 40 stories now and seems to show no signs of letting up. 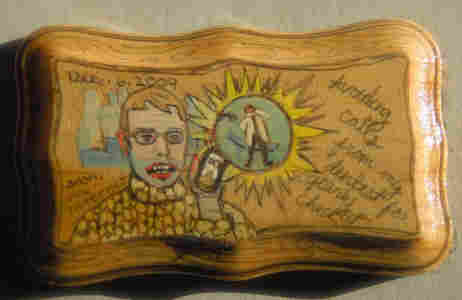