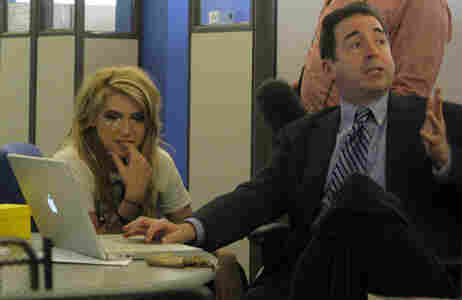 We bring you a story about a cable tv producer from New Jersey, a podcasting libertarian economist, an international pop superstar and the two dead economists who brought them all together.

After the jump, watch the video, download the MP3 and grab the lyrics.

Selected lyrics from "Fear The Boom and Bust" courtesy of EconStories:

John Maynard Keynes, wrote the book on modern macro
The man you need when the economy's off track, [whoa]
Depression, recession now your question's in session
Have a seat and I'll school you in one simple lesson

I had a real plan any fool can understand
The advice, real simple--boost aggregate demand!
C, I, G, all together gets to Y
Make sure the total's growing, watch the economy fly

We've been going back and forth for a century
[Keynes] I want to steer markets,
[Hayek] I want them set free
There's a boom and bust cycle and good reason to fear it
[Hayek] Blame low interest rates.
[Keynes] No... it's the animal spirits

I'll begin in broad strokes, just like my friend Keynes
His theory conceals the mechanics of change,
That simple equation, too much aggregation
Ignores human action and motivation

And yet it continues as a justification
For bailouts and payoffs by pols with machinations
You provide them with cover to sell us a free lunch
Then all that we're left with is debt, and a bunch

Your focus on spending is pushing on thread
In the long run, my friend, it's your theory that's dead
So sorry there, buddy, if that sounds like invective
Prepared to get schooled in my Austrian perspective