Accessibility links
Greece Has Spent Half Its Modern Life in Default : Planet Money In the long view, another default wouldn't be remarkable.

Greece Has Spent Half Its Modern Life in Default

Greece Has Spent Half Its Modern Life in Default 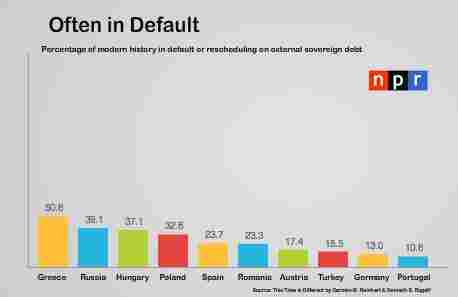 The prospect of Greece defaulting on its sovereign debt is a big deal these days. But in the long view, a default wouldn't be remarkable. Greece has been in default on its debt for more than half the years since 1800, according to Kenneth Rogoff, a Harvard economist.

Other European countries, including Russia, Poland an Hungary, have also spent significant chunks of modern history in default.

"We usually see a bunch of sovereign defaults," in the years following a banking crisis, Rogoff told the Telegraph. "I predict we will again."

Of course, not all European countries are serial defaulters. The U.K., Belgium and all of the Scandinavian countries have stellar credit reports.

Rogoff spoke to Planet Money's David Kestenbaum on yesterday's podcast. In an email to Kestenbaum after their interview, he pointed to a table in his recent book, This Time Is Different, as a reminder of just how often countries default on their debt.

The graphic above uses data from that table, which lists the percentage of time countries have been in default or rescheduling (a technical term explained here) on their sovereign debt.

Note: The graph is based on the years since 1800. For countries that became independent after 1800, the data starts at independence.