Accessibility links
Damage From Haiti Quake Expected To Surpass Country's GDP : Planet Money The Inter-American Development Bank expects the cost of rebuilding Haiti to be between 104-117 percent of the country's GDP. 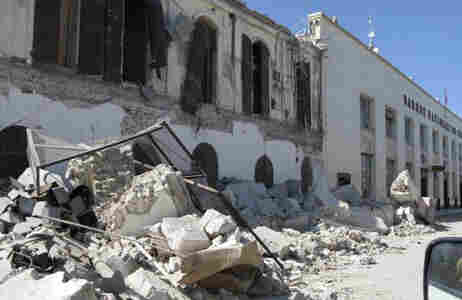 The cost of rebuilding Haiti is expected to be at least $8.1 billion, according to a recent report by economists at the Inter-American Development Bank, that's nearly one billion more than the amount of goods and services the country produced in 2008.

The report from Latin America's main development bank based that estimate on a figure of 250,000 people dead and missing. If that figure climbs as expected, the economists note that a higher cost of rebuilding, up to $13.9 billion, is within reason.

The economists compiled their report by looking at data from "2,000 natural catastrophic events between 1970 and 2008." They say it's likely that the Haitian earthquake will be the "most destructive natural disaster in modern times, when viewed in relation to the size of the Haiti's population and its economy." The damages are estimated to be between 104-117 percent of the country's GDP, compared to the 2004 tsunami which caused damages equal to 7 percent of Sri Lanka's GDP.

The report also looked at the impact the earthquake could have on future growth, noting that the country's economic output is likely to be 30 percent lower than it otherwise would have been.

One concern is that large aid inflows may provoke cost increases, real appreciation and Dutch Disease, increasing aid-dependence and damaging private sector activity not directly related to reconstruction, including the export sector. In the case of Haiti, exports are small (some 10 percent of GDP), but they were growing (at an annual rate of 12 percent in 2009) and are highly concentrated in assembly industries including garments (some 90 percent of exports are assembly goods).

We'll be bringing you more about Haiti's private sector and the country's plans to rebuild the economy in coming weeks. Adam is currently attending an apparel industry conference in Vegas where apparel executives and U.S. trade reps are pushing for more brands to adopt the "Made in Haiti" label.