I just listened to the efficiency podcast with Matt LeBlanc, and grinned while Caitlin joked about David's lawn-mowing question at the end. You see, I too have asked that same question, and have struggled with the nagging feeling that says, "shouldn't you be more efficient with your time, and do something instead of trying to answer questions like these?" However, I have been inspired to actually think it through.

I think that no matter which pattern you mow in, when you're walking with the mower, you're going the same speed. Therefore, it all comes down to the turns. So, think about a rectangular patch of grass. I propose the following -- David's Lawnmowing Efficiency Hierarchy (DLEH. Rhymes with "blech" and sounds like a Yiddush suffix.)

1. The most efficient way to mow is the spiral: start from the outside and do the border, spiraling in to the middle.

2. Next, you have the long stripes: mow the long edge-the length of the rectangle-and then u-turn, and go back forth, striping the turf till you're done.

3. Next, the short stripes: same as long stripes, but this time you're going back and forth across the short distance.

4. Finally, the diagonal stripes: make strips starting at one corner, and going back and forth across the diagonal of the rectangle.Aesthetically, you're going to want to dial this one to 45 degrees.

4b. The Old Man "Keep Off My Lawn You Darn Kids" Deluxe Double-Diagonal Stripes: Do method 4, then do it again so the diagonals crisscross. Recommended for baseball outfields.

Now, the real question is for comparing the spiral and the long stripes. Do you think two 90 degree turns take longer or shorter than one 180 degree turn? I think shorter, because the 180 you have to overshoot, and then turn, and then come back. Plus, if an edge of the yard is against a fence, that 180 can be a real beast up against the fence.

Therefore, I reason that Y < 2X, and so the spiral wins...for time. But clearly, the double-diagonal is the most visually attractive, and if you're like my mother, you drag the mower from the middle of the spiral when you're done with that method, ruining the aesthetic of the spiral even more. 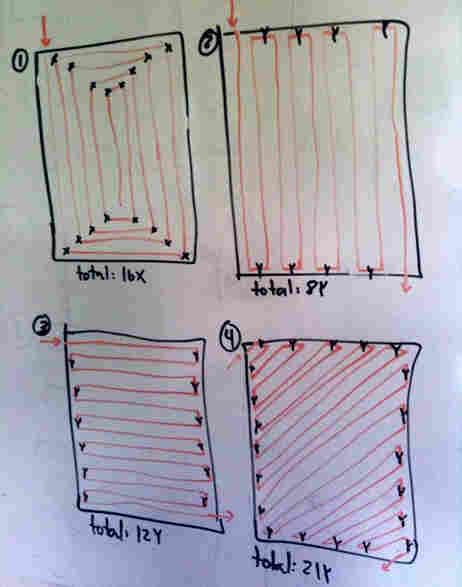