Accessibility links
Bernanke v. Congress: A Viewer's Guide : Planet Money What to watch for when the Fed chief heads to Capitol Hill. 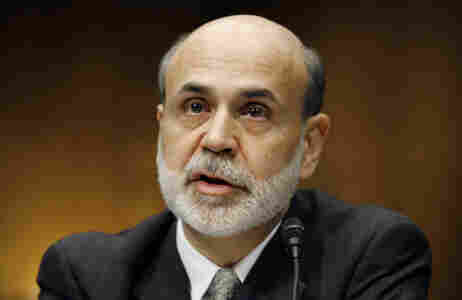 Ben Bernanke has a Capitol Hill double-header this week: He's talking to the House tomorrow, the Senate Thursday.

It's the regular trip he takes twice a year to testify about monetary policy, and the fallout from the financial crisis means he's likely to get grilled.

To learn more about what to listen for, I checked in with Planet Money's Adam Davidson, who's in Washington this week. He'll be talking about Bernanke and Congress on Friday's Morning Edition, and he explained how the hearings are likely to play out:

But it won't be all theater; markets are eager to hear what Bernanke's plans are for monetary policy.

Unemployment is still high. Inflation is low. That's a classic recipe for low interest rates, and Bernanke's likely to assure the world that rates aren't going up anytime soon. (More on that from Bloomberg.)

So if you're watching from the corner bar (what, your bar doesn't show C-SPAN?), you might consider challenging your buddy to take a drink every time Bernanke says "for an extended period." As in: "economic conditions are likely to warrant exceptionally low levels of the federal funds rate for an extended period."

Wednesday's hearing is at 10 a.m. Eastern. Watch it online and see if Adam's predictions come true.