Accessibility links
Why Fannie Mae Is Like A Platypus : Planet Money Federal Reserve Chairman Ben Bernanke recently compared Fannie Mae and Freddie Mac to a platypus. Here's what he means, and why it may be cause for concern. 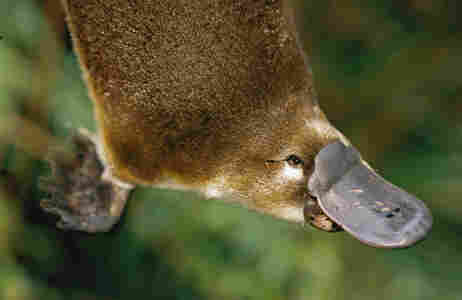 It was a little unnerving this morning when Ben Bernanke compared Fannie Mae and Freddie Mac to a platypus.

Sure, the platypus is a fun, weird animal. But do we really want a biological freakshow to be the model for two giant entities that sit at the center of the U.S. housing market and have cost taxpayers hundreds of billions of dollars?

The government created Fannie and Freddie decades ago, but until 2008 they operated as independent companies. They were supposed to make it easier for Americans to get mortgages. Their basic job was to buy mortgages made by banks, then sell bundles of those mortgages to investors, along with a guarantee that the mortgage would be paid back. They own or guarantee about half the loans in the U.S.

The housing bust hit Fannie and Freddie hard. The U.S. housing market would have been even more of a mess if they went under, so the government stepped in and took them over. Now we have these two giant companies that are, for the moment, run by the government.

There's even a debate over whether Fannie and Freddie should be included in the federal budget. The Obama Administration says no; the nonpartisan Congressional Budget Office says yes -- and figures that Fannie and Freddie added $291 billion to federal outlays for fiscal 2009.

In his testimony to the Senate banking committee this morning, Bernanke called the current situation an "unsustainable" "no-man's land" between public and private. One option, he said, would be to acknowledge that Fannie and Freddie are part of the federal government would be one option. Another would be turning over much of their role to the private sector.

Those are "two very different approaches, but both of them have the advantage of eliminating this platypus ... status that those firms have now," Bernanke said.

But not everybody's in a hurry to change things. Tim Geithner, who testified yesterday before the House Budget Committee, said the Administration doesn't plan to roll out an overhaul plan for Fannie and Freddie until next year.

"We want to make sure that we are proposing these changes at a time when we have a little bit more distance from the worst housing crisis in generations," Geithner said, according to the Associated Press.