Accessibility links
Forget Taxing Marijuana; The Real Money's In Cocaine : Planet Money A Harvard economist estimates how much revenue each state would raise by legalizing and taxing illicit drugs. 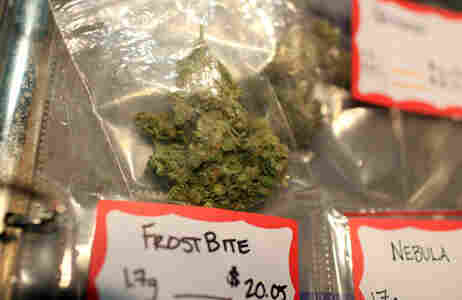 A Harvard economist has estimated how much money states would raise by legalizing and taxing marijuana and cocaine.

In a podcast a while back, Harvard's Jeffrey Miron told us that his estimates for what California would bring in from taxing marijuana are much smaller than some of the numbers that are floating around out there (including a $1.4 billion estimate from state officials).

Since that interview, Miron has come out with a paper estimating, among other things, potential tax revenues from cocaine and marijuana.

It turns out the big tax money is in cocaine.

Sure, legalizing marijuana is highly unlikely and legalizing cocaine isn't even on the table in mainstream politics. Still, it's interesting to know what the numbers would be -- particularly when they're coming from a Harvard economist.

Here's a table that shows Miron's estimates for the annual tax revenues each state would get from marijuana and cocaine. (The figures are in millions; for more details, see the explanation and links after the table.)

On top of state revenues, Miron estimates that a federal taxes would amount to $4.28 billion for marijuana and $12.47 billion for cocaine.

Miron figures taxes on the drugs would be comparable to taxes on alcohol and tobacco. His estimates for how many people in each state use marijuana and cocaine are based on a government survey. (He notes that the number of users would likely rise if the drugs were legalized, but his estimates don't account for this.) He estimates that if marijuana and cocaine were legalized, their prices would fall by 50% and 80%, respectively. The research was funded by the Criminal Justice Policy Foundation; here's the foundation's take on drug policy.