Accessibility links
Global Poverty And The Cost Of A Pair Of Jeans : Planet Money If you're buying your jeans in the U.S., tariffs make a big difference. That's a big deal for developing countries trying to build their apparel industries.

Global Poverty And The Cost Of A Pair Of Jeans

Global Poverty And The Cost Of A Pair Of Jeans

The classic way for a country to work its way out of poverty is to build a textiles industry. And if you're a developing country today looking to get into the textiles business -- making pants, shirts, that kind of thing -- you have to have a trade deal with the U.S.

Adam Davidson and Chana Joffe-Walt have been reporting recently on the effort by Haitian businesspeople to land a better trade deal with the U.S. (They did a podcast on the subject last week, and they have a story airing today on All Things Considered.)

To understand just how important trade deals are, I wanted to see the cost of some basic article of clothing -- a pair of jeans, say -- made in different countries. I tracked down Kristie Tippner, a retail strategist at Kurt Salmon Associates, a company that helps retailers figure out this sort of thing.

She put together the table below. It breaks down all the costs of making, shipping and importing jeans from different countries to the U.S. (These are basic jeans that would retail for about $20 to $40.) 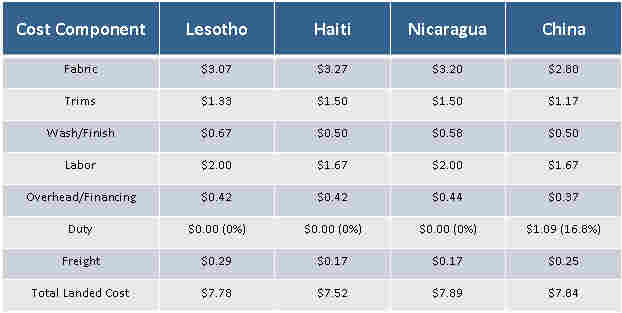 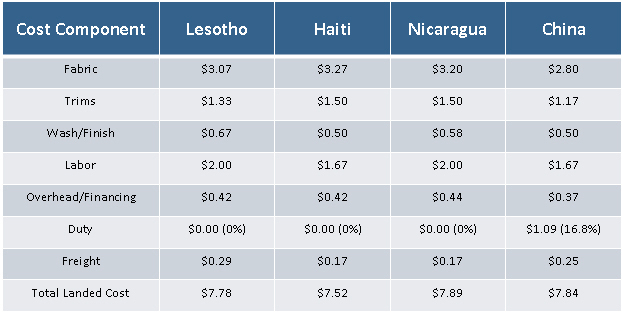 The bottom line there -- "Total Landed Cost" -- shows what a U.S. company would pay for the same pair of jeans made in different countries.

That bottom line is roughly the same for everybody -- just over $7.50.

But that's only because three of the countries (the ones that aren't China) have special, trade deals with the U.S. that make their imports duty-free. China, on the other hand, is getting hit with a 16% tariff. If these poor countries had to pay the same import tax, they wouldn't stand a chance against China. Their apparel industries would be crushed.

A few other details about the line items in the chart: