Listen
Attack Of The Special Interests! 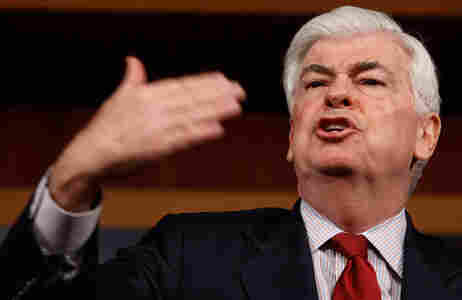 Come Monday, we'll finally get to see what's in Chris Dodd's finance-reform bill. In today's podcast, we hear from a pair of Congressmen what's likely to happen next:

"Once the legislation came down, I can tell you that every special interest in the planet came out," Rep. John Campbell says. He's talking about the lobbying that went on after the House introduced its version of the bill.

But enough about process. Here are two sections of the Senate bill we'll be keeping an eye on:

Yes, they sound boring. But they're important if you care about your tax dollars bailing out failed banks and insurance companies. Derivatives took down AIG; resolution authority was a key problem when Lehman Brothers went bust and markets panicked.

They also talk about derivatives and resolution authority with Mike Konczal, the finance guy behind the blog Rortybomb.

Here's David on the question of resolution authority

Let's say one of these too-big-to-fail things does fail. Let's figure out a way they can crumble in a nice orderly collapse that doesn't drag everything around them down with them. So one idea is just not to let these firms get so big in the first place. Another thing is to have an emergency plan in place ... so maybe you would have a quick way to go through bankruptcy if a firm gets in trouble

There are these financial products called derivatives. Basically ... I pay you a little bit now. And if something weird or unexpected happens, you pay me a lot later. ... The problem with derivatives is it's basically two guys on the phone. I call you and say, "Will you sell me this derivative?" and you say, "Yes." So one idea for how to make them safer is put them on an exchange — make them public.

And here's Mike, on why you can't separate resolution authority from derivatives reform: