Accessibility links
Podcast: We Bought A Toxic Asset! : Planet Money Remember toxic assets? Those weird, mortgage-backed securities that almost brought down the economy? We bought one. 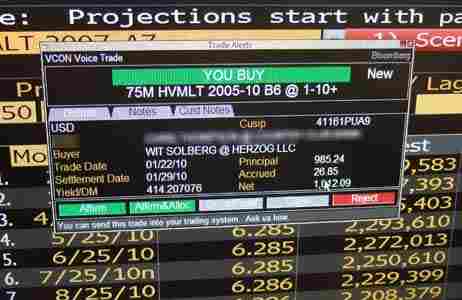 We thought it would help us figure out how the housing bust is playing out. So we pooled our own money, about $1,000 in total. We sent David and Chana out to Kansas City, where a former Wall Street guy named Wit Solberg who evaluates toxic assets for his clients and sometimes buys the assets himself.

Of course, it's marked down for a reason. About 15% of the homes in the bond are in foreclosure, and nearly half are behind on their payments. The foreclosures will continue to mount, and at a certain point our asset will be wiped out. But until then, we'll get monthly payments. If we make it to Thanksgiving, we could double our money. (We'll be giving any profits to charity, by the way.)

We'll have a lot more on this later this week, including a radio story and some Web tools that will let you see how our asset is doing.