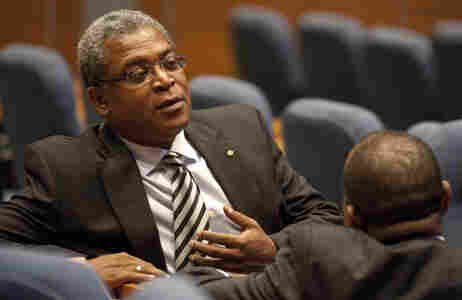 They interview Bellerive at his official residence, and while they're talking, a U.S. Army helicopter flies by. It's a reminder of the massive foreign presence in Haiti. And it's not just the military; all sorts of people from around the world looking at everything from Haiti's ports to its health-care system.

But as plans for what Bellerive calls Haiti's "refoundation" get hashed out, there's some tension between the Haitian government and the international community. Near the end of the interview, Adam asks:

With all the money coming in from the World Bank, from the U.S. ... Who gets to be in charge of the refoundation of Haiti?

"I am," Bellerive says. He goes on to explain how the Haitian government is working on its own proposals for how to use international funds. And he explains why:

... If you don't make a plan made by the Haitians and for the Haitians, it won't work. It didn't work the last 50 years, it's not going to work now. ... You have to put the Haitians at the center of what the Haitian needs.I believe we have some small comparative advantage to know what we need.

For more on Haiti, read our recent update on Yvrose Jean-Baptiste, the microentrepreneur who we first heard from in a February podcast. And read about blue jeans, Haiti's textile industry and high fashion.