Accessibility links
Did China's Central Bank Take Your Job? : Planet Money Is China manipulating its currency? What does it even mean to manipulate a currency, anyway, and how does a country do it? On today's Planet Money, Alex Blumberg and David Kestenbaum explain the whole Chinese currency thing. 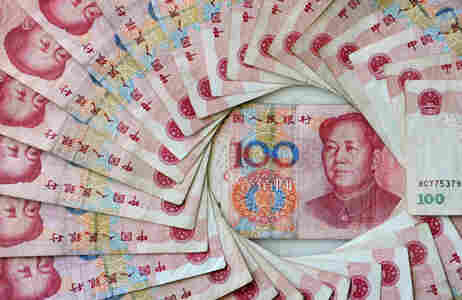 Is China manipulating its currency? What does it even mean to manipulate a currency, anyway, and how does a country do it?

Start with a U.S. entrepreneur who sends payments, in dollars, to a Chinese factory. The Chinese factory goes to the bank and sells those dollars to buy yuan. That's happening at factories all over China. All other things being equal, that should mean that demand for yuan rises, driving up the value of yuan relative to dollars.

But China's central bank is cranking out more and more yuan. So the supply of yuan increases along with demand, and the value of yuan remains stable.

Some economists say this constitutes currency manipulation. They say that China is keeping the value of its currency artificially low, which makes Chinese goods cheaper in the rest of the world. It also makes goods made in the U.S. more expensive in China. That in turn hurts sales of U.S. goods in China, which raises U.S. unemployment, some argue.

The Chinese government, and some economists, say China is not manipulating its currency.

We'll be hearing more about this issue in the next few weeks. By April 15, Tim Geithner is required by law to tell Congress which countries are manipulating their currencies.

Don't hold your breath, though: In the most recent report, issued six months ago, the U.S. didn't brand a single country as a currency manipulator.