Accessibility links
Why Greece Is Stuck With The Euro : Planet Money "I don't see how it's feasible to wriggle out," says Berkely economist Barry Eichengreen.

Listen
Why Greece Is Stuck With The Euro 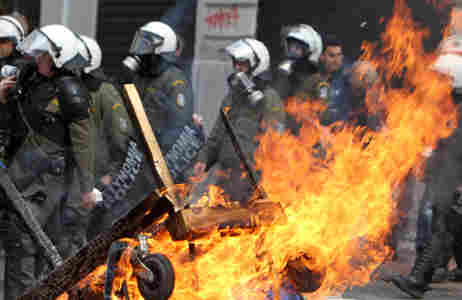 Could the Greek crisis spell the end of the Euro? No way, Berkeley economist Barry Eichengreen says on today's podcast.

Imagine, he says, that the Greek parliament were to even discuss the possibility of going back to Greece's old currency, the Drachma:

Your parliament is debating whether to reinstate the Greek Drachma precisely in order to print a whole lot more of it and push the Drachma down against the Euro ... What would you do with your money under those circumstances? Answer: You'd wire all of it to a German bank where it would be more likely to hold its value. ...

Everyone who owned a Greek bond would sell it and buy a German bond on the first day they got wind of the possibility that the Greek parliament was going to talk about this. ...

They have to figure out a way to make life with the Euro work. And their Euro partners are going to have to help them. ... They're stuck with the euro. I was going to say almost certainly, but let me say certainly. I don't see how it's feasible to wriggle out.

Eichengreen's got plenty more to say about the Euro. He argued recently that European countries should put in place a system for Euro-zone bailouts, complete with "temporary control of the national budget by a committee of 'special masters' appointed by the European Union." (Somehow, this idea seems unlikely to gain much traction with European governments.)

And he wrote a while back about the massive logisitical hurdles a country would have to clear to exit the Euro.