Another Milestone For Apple: Passing Microsoft

Another Milestone For Apple: Passing Microsoft

Microsoft still makes more money than Apple -- $4 billion in profit in the first quarter of this year, compared to $3 billion for Apple.

But Apple's profits have been growing much, much faster than Microsoft's over the past several years.

And Apple's higher market cap ($223 billion, compared to $219 billion for Microsoft) suggests investors are betting the rapid growth will continue.

Here's a chart from Google Finance that compares the performance of the stocks over the past few years: 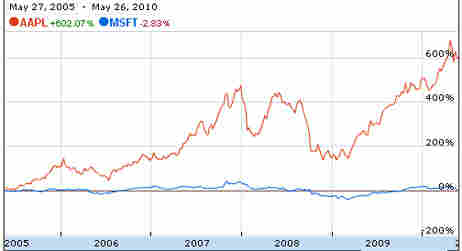 Sill, Apple does have some troubles of its own.

There has been a recent string of suicides at a factory in China that assembles electronics for Apple and other major technology brands. Apple said today that it's "saddened and upset" and is investigating, Bloomberg News said.

The executive director of a New York-based group called China Labor Watch said the factory is a sweatshop that "tramples" workers' personal values, according to Bloomberg. The factory has denied this.