Accessibility links
Dow 10,000! (An Illustrated History) : Planet Money Stocks were way down this morning, and the Dow fell below 10,000. That threshold has no intrinsic meaning, but it has this very loaded, emotional history. 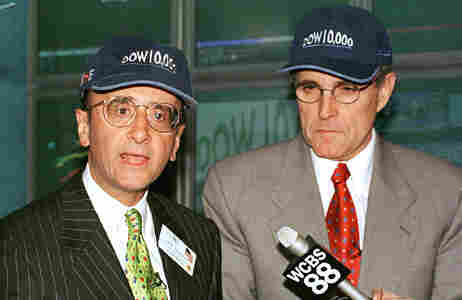 Stocks were way down this morning, and the Dow fell below 10,000. That threshold has no intrinsic meaning, but it has this very loaded, emotional history.

The first time the Dow closed above 10,000, it was a really big deal. They made hats, as if the stock market had just won the Super Bowl, or something.

Here's what the WSJ said the next day:

Traders said the close above 10000 was a landmark in a bull market that has made millions of Americans, especially those nearing retirement, feel more financially comfortable than they ever imagined they could.

When you look at how the market was behaving in the decade leading up to that day, it's pretty amazing how much the market went up: 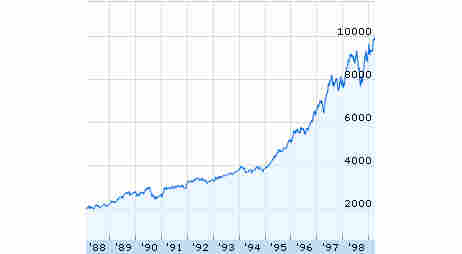 Still, that WSJ story does have a note of caution:

Many market analysts, especially those with enough gray hair to remember past bear markets, worry that Dow 10000 could be remembered as a high-point not of investor triumph but of market excess.

Right. Here's what's happened in the years since then: 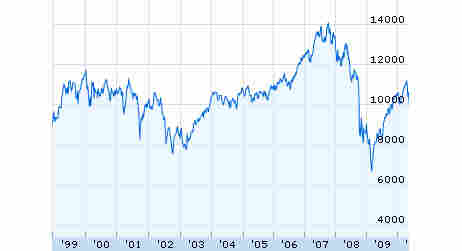 All those ups and downs made for plenty of Dow 10,000 moments, both on the upswings and the down.

In June of 2002, after the Dow crossed 10,000 on the way down, here's how the Washington Post accounted for the decline:

There was the revelation of yet another Securities and Exchange Commission investigation of a major corporation's accounting ... There was the now-usual run of credit downgrades, profit shortfalls and weak-dollar alarms, plus genuinely scary things such as the prospect of nuclear war in Kashmir and more terrorist acts in the United States.

The return to 10000 was a relief to investors whose faith in stocks was sorely tested by the popping of the technology bubble in 2000 and the three-year bear market that followed.

The market was rising at that moment in part because the Fed was looking at leaving interest rates very low for a long time -- a decision that ultimately wound up fueling the housing bubble, according to many economists.

That bubble, of course, fed into the global financial crisis. Which brings us to October, 2008, when USA Today wrote:

Stocks worldwide plunged Monday on growing signs that the credit crisis is spreading to banks and economies outside the USA, sparking a sharp selling spree on Wall Street that drove the Dow Jones industrials below 10,000 for the first time in four years.

And the bounce-back a year later, after stocks rose by more than 50% in the span of six months and crossed 10,000 again. From the Washington Post:

Even the most optimistic bulls do not predict another 50 percent surge over the next half-year. More likely, analysts say, is a "sideways churning," as the economy wrestles to bring down unemployment and companies try to generate profit through new revenue, not just cost-cutting.

The Dow's been up and down since then -- it closed below 10,000 as recently as February, the WSJ notes today. Just to round things out, here's what the New York Times says about today's decline:

Shares on Wall Street and in Europe skidded Tuesday and the euro resumed its fall as concerns about public sector finances in Europe escalated.

Thanks to Katie Daugert of the NPR Reference Library for help with this post.

Correction: An earlier version of this post listed the wrong date for the photo at the top. Thanks to the commenters who pointed out the error.