Accessibility links
Pabst Blue Ribbon: $250 Million In Hipster Gold : Planet Money The Pabst Brewing Company has a long and convoluted history that includes an owner who wanted to build a giant statue in San Francisco Bay. Now, it will reportedly be sold for $250 million. 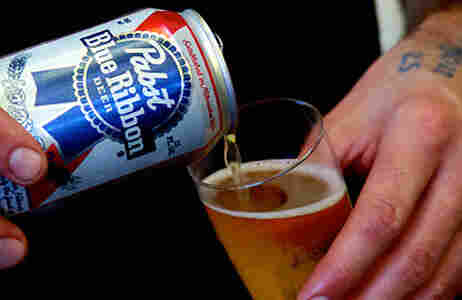 1. The guy who used to own Pabst died, and left the company to a charitable foundation. The IRS isn't happy about that.

2. Sales have been rising (thank you, Williamsburg), and the company may soon be bought for $250 million.

3. Pabst is a "virtual brewer" -- it pays other companies to make its beer.

A guy named Paul Kalmanovitz owned the company back in the day. Kalmanovitz was a Polish immigrant who came to this country, got rich, and once offered to donate $15 million to erect a Statue of Justice in San Francisco Bay. (Like the Statue of Liberty, only for justice.)

When he died in 1987, he left Pabst Brewing to a charitable foundation. But charitable foundations aren't supposed to own for-profit companies; the IRS initially gave the foundation a 2005 deadline for selling the company, but that got pushed back when a buyer couldn't be found, according to the Milwaukee Journal Sentinel.

In the meantime, sales of Pabst's namesake beer, Pabst Blue Ribbon, have been strong: Retail sales rose 30% in a year, Fortune said last December. The beer is cleverly marketed, and hipsters like beer.

Pabst contracts out its brewing to other companies, including MillerCoors, Fortune says. But a Pabst brewmaster oversees the recipes.

Last fall, the company hired Bank of America/Merrill Lynch to explore a sale -- somewhere in the neighborhood of $300 million.

Now, the company has reached a deal to sell itself for $250 million, this morning's WSJ reports. The buyer is C. Dean Metropoulos, a food magnate who built consumer brands including Vlassic Pickles and Bumble Bee Tuna.