Accessibility links
Subway To Everyone Else: Stop Selling 'Footlong' Sandwiches : Planet Money The company has applied to trademark the term "footlong" and is sending out cease-and-desist letters.

Subway To Everyone Else: Stop Selling 'Footlong' Sandwiches

Subway To Everyone Else: Stop Selling 'Footlong' Sandwiches 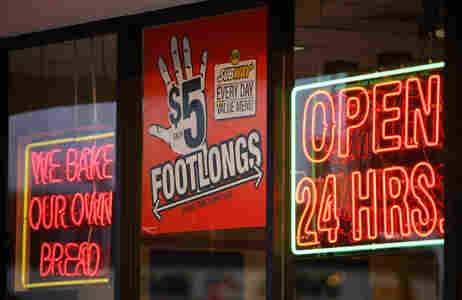 The Coney Island Drive Inn, a restaurant in Brooksville, Florida, has been selling 12-inch hot dogs -- the restaurant calls them "footlongs" -- for more than 40 years. Its Web site is gotfootlongs.com.

Last week, the restaurant got a letter from a lawyer representing Subway, which, as you may have heard, sells 12-inch sandwiches for five bucks.

After explaining that Subway "has applied for the trademark FOOTLONG (TM) in association with sandwiches," the letter says:

(The full letter is online here.)

Given our recent interest in trademark issues -- recall the short life and painful death of the Planet Money Money Honey (TM) visor -- it seemed worth learning more. So I put in calls to Subway and to Blair Hensley, owner of the Coney Island Drive Inn.

Turns out, Subway has already recanted the letter.

It was a "clerical error," Kevin Kane, a Subway spokesman, told me. Using "footlong" for hot dogs is no problem -- the company is only trying to trademark the term for sandwiches, Kane said.

I asked him how many other footlong-related cease-and-desist letters the company has sent out, but he said he couldn't comment on that.

"Any legal process we go through is to protect the investment our franchisees have made in the brand," Kane told me. "If 'footlong' is a name that's been associated with us, it would benefit them that we would take an action like this to protect the association."

The trademark office will have to weigh that argument against the notion that "footlong" is commonly used to describe sandwiches that are 12 inches long, and not the property of one company.

Or, as Hensley said: "How can you trademark the word footlong?"

He said he had a photo from 1968 that shows the phrase "world famous footlongs" painted on the outside of the building, and a hand-painted menu board from 1963 that says "footlong specialists."

"We do have short dogs, but the majority of dogs we sell are footlongs," Hensley told me. "That's why you come here."

Subway's trademark applications for "footlong" are online here and here. (The applicant is Doctor's Associates, Inc., which is the name of Subway's parent company. It was founded by a guy who had a Ph.D. and a teenager who wanted to be a doctor.)