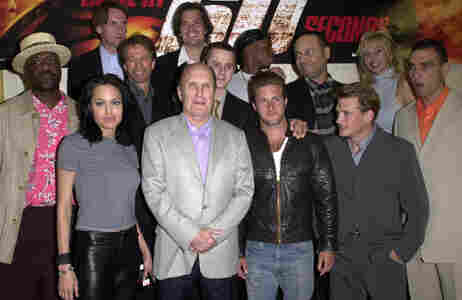 There's this weird thing in the movie business: Almost all movies lose money. Except they don't, really.

On today's Planet Money, Edward Jay Epstein, the author of a recent book called The Hollywood Economist, explains the business of movies.

As a case study, he walks us through the numbers for "Gone In 60 Seconds." (It starred Angelina Jolie and Nicolas Cage. They stole cars. Don't pretend like you don't remember it.)

The movie grossed $240 million at the box office. And, after you take out all the costs and fees and everything associated with the movie, it lost $212 million.

This is the part of Hollywood accounting that is, essentially, fiction. Disney, which produced the movie, did not lose that money.

Each movie is set up as its own corporation. So what "lost money" on the picture is that corporation — Gone In 60 Seconds, Inc., or whatever it was called.

And Gone In 60 Seconds, Inc. pays all these fees to Disney and everyone else connected to the movie. And the fees, Epstein says, are really where the money's at.

This system is partly a historical accident. But, Epstein says, all the accounting tricks can also help protect the egos of Hollywood's finest: They allow actors to say they're landing huge contracts to make movies, even when the actors may never see most of that money.

After the jump: A trailer from "Gone In 60 Seconds."