Accessibility links
Maybe It Wasn't Just Greece : Planet Money Glitches or mistakes may have played a role in this afternoon's market plunge and partial recovery.

In the span of a few minutes this afternoon, the Dow lost nearly 1000 points, then gained most of it back. There were lots of reports saying that fears about Greece triggered the sell-off.

But mistakes by traders or glitches in computerized trading systems may have played a role as well.

The WSJ reports that a trader may have accidentally placed an order to sell $16 billion in futures tied to stock indexes, when he meant to place the order for $16 million.

And there were "a number of erroneous trades" during the minutes when the market was plunging, a spokesman for the company that owns the New York Stock Exchange told Bloomberg.

The FT's Alphaville blog points out that Procter & Gamble shares fell by more than 20 percent -- about three times as much as the Dow -- before regaining almost all of the ground it lost, and says the decline may have been related to a "technical screw up." And Barron's notes that shares in Accenture -- which opened and closed the day above $41 per share -- traded for one cent per share at one point today.

Here's a chart that shows Procter & Gamble (in blue) compared to the Dow (in red) this afternoon: 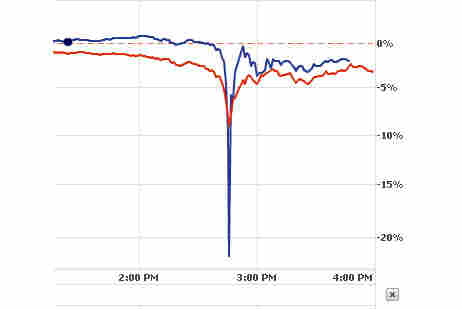