Accessibility links
Inside A Payday Loan Shop : Planet Money Payday lenders spring up on every corner. But despite the increased competition, their rates stay the same. An economist explains.

Listen
Inside A Payday Loan Shop 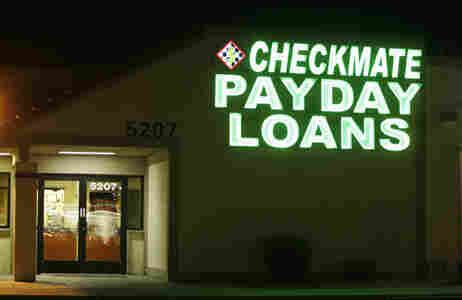 During the credit boom, lots of payday loan stores sprang up in Mansfield, Ohio.

Chris Browning, a long-time manager at one payday lending outlet in the town, says a bunch of the new stores opened up right next to her shop. "If I was a good golfer, I could put a golf ball through the window of three other companies," she says.

You'd expect that all those companies would have competed with each other, driving down interest interest rates for borrowers, But that didn't happen; they all charged, basically, the same price.

The lack of competition may have been the unintended consequence of a law that was supposed to protect borrowers.

Ohio, like most states, has a ceiling on the interest rates payday lenders can charge. But price ceilings have often "acted as magnets for prices," says Robert DeYoung, an economist at the University of Kansas.

DeYoung did a study on rates at payday lenders in Colorado, after the state put a rate ceiling in place. Right after the cap was created, there was a range of prices; a few years later, over 95% of the payday loans in Colorado carried the maximum interest rate.

"Everything else equal, suppliers of goods would rather collude with each other to set a high price," DeYoung says. The cap basically does that for them, DeYoung says. "The government has handed them a tool for colluding."

Also on the podcast: We talk to a Planet Money listener who is working at a payday loan shop to pay his way through college. (He wants to be a financial advisor.) And we hear from Gary Rivlin, author of a forthcoming book about the business of lending money to poor people.