Accessibility links
What's The Most Expensive Part Of The iPhone 4? : Planet Money Hint: In Applespeak, it's known as a "retina display." The company's economic model was made famous by razor manufacturers.

What's The Most Expensive Part Of The iPhone 4?

What's The Most Expensive Part Of The iPhone 4? 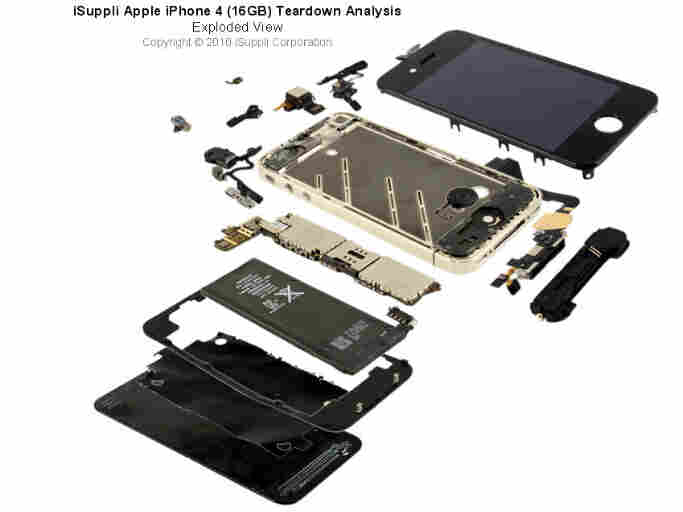 The components of the iPhone 4 cost a bit less than $200, according to the market research firm iSuppli and Bloomberg News.

The most expensive part: The screen ("retina display," in Applespeak), which costs about $28.50.

Estimates for a few other parts in the new iPhone:

The gyroscope chip designed to sense how the iPhone moves in three dimensions costs about $2.60. (That's in addition to the accelerometer, which costs 65 cents.)

The processor costs about $10.75, and is made by Samsung Electronics. That's the same processor used in the iPad.

This analysis is fun, but it's just one little piece of the bigger iPhone economics picture.

For one thing, it doesn't include costs of development, assembly, marketing, etc.

Also, it doesn't include the subsidy AT&T pays Apple -- which probably amounts to hundreds of dollars per phone. It's worth it for AT&T to subsidize the phone, because of all the money in monthly fees the company makes from new subscribers.

This economic model was made famous by razor manufacturers -- give away the razor, make your money selling blades. It's also the model used for selling video game consoles: companies give away the box and make their profit selling the games.