Accessibility links
Warren Buffett: Wise Grandfather vs. Billionaire Financier : Planet Money Both sides of Buffett were on display today, as he testified before a commission that's investigating the financial crisis. 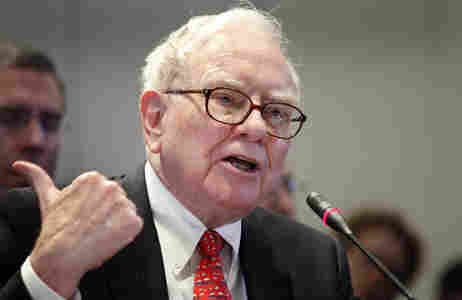 Warren Buffett -- the billionaire financier -- today had this to say about those weapons:

I use them to make money. If I think they're mispriced, I buy them.

Both sides of Buffett were on display today.

He was testifying before the Financial Crisis Inquiry Commission, which was looking into the role the ratings agencies played in the crisis.

Buffett's company, Berkshire Hathaway is a major shareholder in Moody's, one of the big ratings agencies.

The agencies agencies are paid by businesses and governments to issue credit ratings, which are hugely influential in the bond market. The agencies put their highest ratings on lots of mortgage-backed bonds that got hammered in the housing bust.

Here's Buffett the financier on Moody's:

I've never been in Moody's. I don't know where they're located. I know their business model is extraordinary.

And here's Buffett the grandfatherly investor saying the same thing, by way of analogy:

We own a significant position in Procter & Gamble. ... I don't know how they make Tide.

Buffett suggested that Moody's wasn't really to blame for missing the magnitude of the housing bubble, because almost everybody missed it, including him. "I blew it," he said.

And he suggested that the high credit ratings now assigned to cities and states might be called into question in a few years.

"There will be a terrible problem," with state and local government debt, he said. "And then the question becomes, will the federal government help them?"

Bonus Buffett: Read our posts on Buffett's lobbying on derivatives, his stake in Goldman Sachs and the backstory behind his appearance today.