Accessibility links
Sandwich-In-A-Can Financier Sued For Fraud : Planet Money An entrepreneur raised $145 million by telling investors he was making commercial real estate loans. But he spent much of the money on himself, and on other projects, according to a lawsuit filed by the SEC. 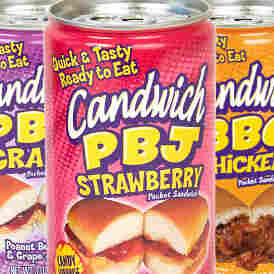 So this finance guy in Utah had some creative investment ideas, according to the SEC.

A loan to a company looking to sell canned sandwiches in vending machines, for example. (Candwich!)

Also, an equity investment in a company that sells rose petals with text printed on them. (Speaking roses!)

But there was a problem, the SEC said in a lawsuit filed this month.

The guy raised the cash for his investments by telling investors that he would use their money to make commercial real estate loans.

In all, Travis L. Wright raised $145 million from 175 investors between 2001 and 2009, according to the suit. He only invested $6 million in the kinds of things he said he would be investing in, the SEC says. (Here's the full complaint filed in the case.)

Wright also spent $15 million of investors' money for his own expenses, according to the lawsuit. Among other things, he bought a house formerly owned by an unnamed pro basketball player. And he paved his driveway using cobblestones imported from France.

Wright's investment fund filed for bankruptcy last year. Bloomberg News, the New York Times and the Salt Lake Tribune all said he couldn't be reached for comment. I left a message this morning at a number listed for Wright, and haven't heard back.

Meanwhile, the NYT reports this morning, the president of Candwich (who has not been accused of wrongdoing) says he hopes to go into production later this year.