Accessibility links
Inside Our Toxic Asset: An 81-Year-Old Man With A Dog Named Muffin : Planet Money We bought a toxic asset full of mortgages gone bad. Then we went to Florida to find some of the people behind the mortgages. 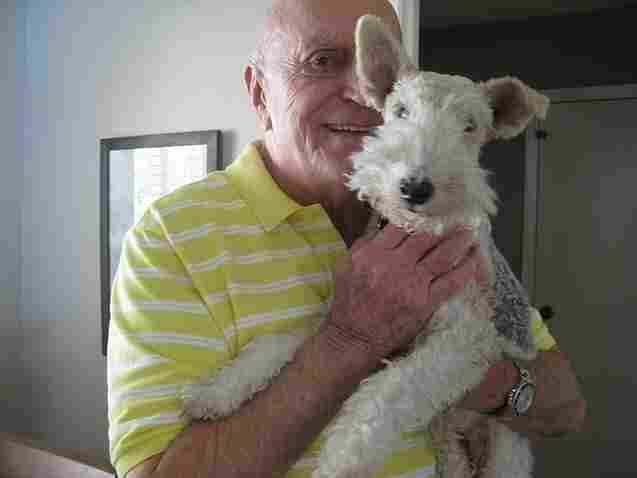 Richard Koenig is 81 years old and has a dog named Muffin. He doesn't look like a deadbeat.

But Koenig, like many, many other people, owes us money. And he has no plans to pay it back.

Earlier this year, we pooled our money and bought a tiny slice of a toxic asset -- one of those complicated bonds at the center of the financial crisis.

It's backed by actual mortgages on actual houses. But until recently, we'd never seen any of those houses, or the people who borrowed money to buy them.

But with the help of Michael Braga, a reporter at the Sarasota Herald-Tribune, we were able to track down a few of the people whose mortgages are included in our asset.

We got wrong numbers, we left voice mails, we knocked on doors. Most of the people we called didn't want to talk to us.

Koenig was gracious enough to show us the condo he bought with a $300,000 loan. He planned to fix up the place and move into it with his wife. But after the housing market crashed, he owed far more on the place than it was worth.

So he decided to not to move in. Instead, he kept living in his old house, and stopped making payments on the condo.

"It went against everything that I was ever taught to believe," he says. "But if I have to compromise the way I live, I'm not really not going to do that. Not at almost 82 years old."

Koenig was what we expected to find: Someone who bought a house to live in, but ultimately couldn't make it work. But with the help of a group of reporters at the Herald-Tribune, we learned that wasn't true for all of our homeowners.

We also visited a foreclosed house that was bought by a lawyer named Derek Taaca. Taaca ultimately defaulted on five loans, totaling $3.6 million  -- including a $991,000 loan in our toxic asset. He didn't return our calls.

Of the nine loans we identified, three were given to investors who owned multiple properties and apparently never lived in the homes.

And one of those mortgages is listed in an FBI affidavit. It's allegedly tied to a ring of investors who may have lied to the banks to get loan after loan. That group has defaulted on $120 million in loans, according to Braga, the Sarasota reporter who brought the affidavit to our attention.

We'll have more on that affidavit, and the story behind it, later today. Update: Read the post now.

In the meantime, you can read Sarasota Herald-Tribune's investigative project on house flipping in Florida.