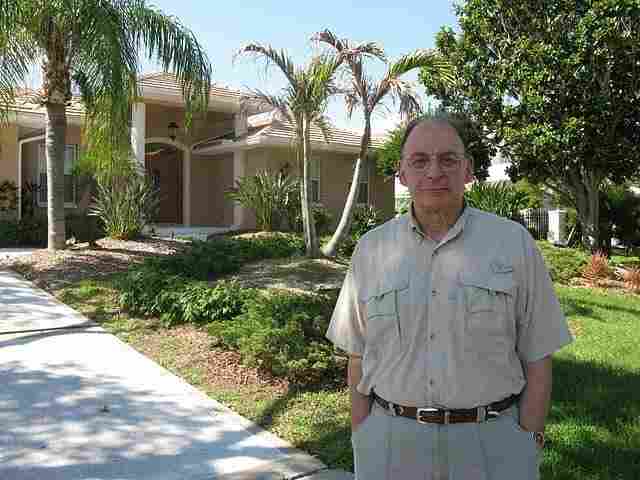 Dr. Fred Bloom unwittingly sold this house into what may have been a mortgage-fraud ring. Chana Joffe-Walt/NPR hide caption

I may be on the losing end of a $200 million mortgage-fraud scheme.

Earlier this year, my colleagues and I bought a tiny slice of a toxic asset, a bond backed by a bunch of bad mortgages. We’ve been using the asset as a window into the housing boom and bust.

Recently, a group of reporters at the Sarasota Herald-Tribune told us that one of the mortgages in our asset was part of a real-estate scheme being investigated by the FBI.

That told me that, to understand how the scheme worked, I should learn the story of the house on Cove Terrace.

The house is a nice Florida place -- red-tile roof, pool, boat dock. In 1999, it was owned by Dr. Fred Bloom, a doctor who unwittingly sold the house into what may have been a mortgage-fraud ring.

Bloom spent a happy decade raising kids here. In 2000, he sold the house for $600,000 -- much less than he'd hoped. The buyer was represented by Craig Adams, a real-estate agent known in Sarasota as a guy who could make deals happen.

“I was really upset!” Bloom says. He thought his real-estate agent had misled him about the value of the house. But there was more to the picture than he knew.

According to Matthew Doig, an investigative reporter who has written about mortgage fraud for Sarasota Herald-Tribune, this is what happened:

Adams had a group of friends and associates.  One would buy a house. Then he’d sell it to another, for a higher price. Then it would get sold again, at a price that was still higher. The sales often wouldn’t get listed publicly and Adams would set the prices.

With each sale, someone would take out a loan that was more than big enough pay off the previous loan. The players would split the remaining cash.

"After Dr Bloom is out of the picture, that house is completely controlled by Craig Adams," Doig says. "Every time it is, sold Adams is representing both the buyer and seller."

I called Adams seeking comment, but he didn't return my calls.

"The yard was really in disrepair," he said. "It looked like it was vacant."

This kind of scheme is common during housing booms, according to Guy Cecala, of the trade magazine Inside Mortgage Finance. But passing a house back and forth, and taking out ever bigger loans, has to end badly for someone.

By 2007, Bloom's old house was owned by yet another associate of Craig Adams -- a guy who wound up defaulting on more than $2 million in loans. The bank foreclosed on the house.

The banks clearly lost big time.  They kept handing out the loans because they were caught up in the bubble too.

At the height of the bubble, a third of the  people buying houses were never planning to live there.  That doesn’t mean all those loans were all fraudulent.

At the same time, mortgage fraud can be something as simple as saying you’re going to live in a house you never plan to set foot in.

The FBI is looking into more than 3,000 cases of mortgage fraud.  And in Sarasota they're doing it with help of Craig Adams: The Sarasota Herald-Tribune has reported that he’s gone from real estate genius to FBI informant.