Accessibility links
The Friday Podcast: Tallying Up The Pelican Bill : Planet Money Today on the podcast, we come up with 5 different ways to put a pricetag on a pelican. 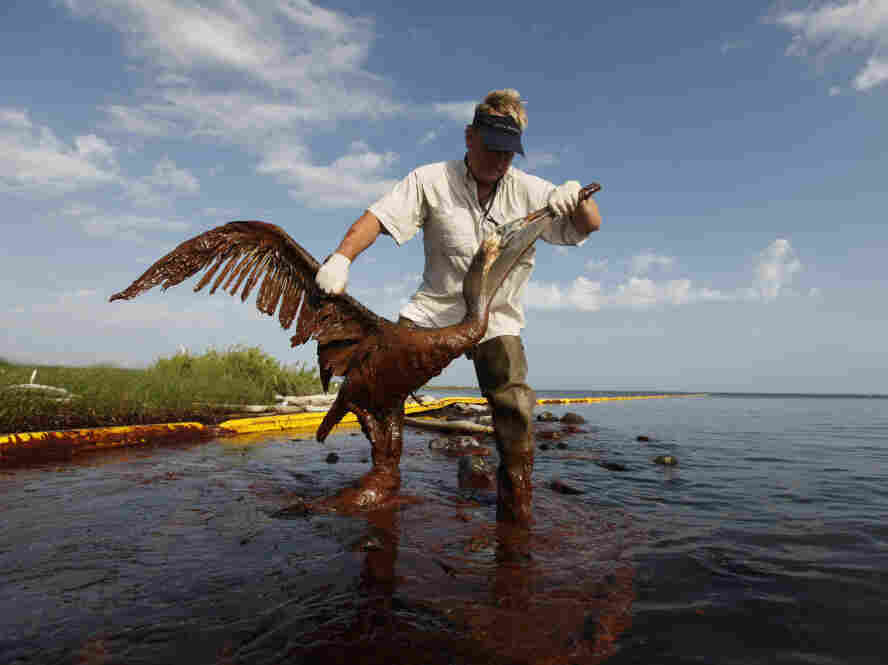 What’s the price of a pelican? The total for a turtle? The dollars for a dolphin?  Its not a philosophical question anymore. The BP oil spill killed hundreds of these animals, and the Feds want to make darn sure that BP pays the total bill.  But coming up with a precise economic value for wildlife has stymied economists and scientists for decades. There’s no market for most of these animals. No catalog for endangered species. No eBay or Craigslist for migratory birds.

That’s not going to stop us from trying, though.  Today on the podcast, we come up with 5 different ways to put a pricetag on a pelican.

This is the first thing you’ll hear from most people when you ask them to think about a value for the birds. At the Bronx Zoo, we met Ted Breg who loves to photograph pelicans, and he refused to even start an economic discussion of the devastation in the gulf. “It can’t be done, “ Berg says. “All the money in the world won’t bring them back.” It’s a fine philosophical answer, but its not a very useful one. You can’t present a bill to BP for all the money in the world.

Just because you can’t buy a pelican, doesn’t mean we couldn’t find people spending money on them.  Hundreds of professionals and volunteers have traveled to the Gulf to rescue birds from the oil and clean them off. Millions of dollars are being spent. Isn’t that an economic indicator of value? Jay Holcomb, of the International Bird Rescue Research Center, says maybe. He says it's a sign that people feel a sense of responsibility for the future of the species. Holcomb says the average cost of rehabilitating a pelican before the BP spill was relatively modest: 500 dollars. Does this mean that the minimum price tag for a pelican is 500 bucks?  Perhaps, but Planet Money’s Adam Davidson doesn’t buy it. He says no one values birds more than environmental non-profits, so they're probably not the best indicator.

Remember the film Flipper?  Don’t worry.  No one else does either.  The one thing that film did have was a great comedic sidekick for the dolphin: Pete the Pelican.  It turns out that Hollywood provides something that looks a lot like a market for captive pelicans. We found a rate sheet for a pelican rental company.  A non-flying bird will set you back $1,500 a day. A flying bird could bring up to $4,500 a day. A pelican with a good agent could be worth hundreds of thousands of dollars. But it seems like a stretch to use Pete the Pelican as stand-in for a wild bird. Think of it this way: does the fact that Tom Cruise can make 10 million dollars a movie, mean you're worth that much too?

Don’t tell an economist that you can’t  put a value on the invaluable.  They’ll come up with an entire discipline to do it.  It’s called contingent valuation, and  the theory is that if you ask the right way, people can asses how much a public resource is worth. We talked to the man who put a price tag on a wild duck,  Gardner Brown, of the University of Washington.  He used a survey of hunters to find out how much they would pay to take home an extra bird.  Could we use the same techniques to value a pelican?   In theory, Brown says.  But he notes that it would be difficult to get people to set aside their emotions about the oil spill and isolate how much they would actually pay to save the pelicans.

All these failed valuation techniques are familiar turf for scientists at the U.S. Fish and Wildlife service.  They’ve tried them all too.  Roger Helm with the agency says that they used to go to biological supply firms to put a price on dead fish.  They did surveys after the Exxon Valdez oil spill to value the wildlife lost.  But these days, the Feds do something different.   Instead of telling a company what they have to pay for dead animals, they just tell them they are required to restore the population of the animal.  47 dead pelicans?  The company has to pay for enough habitat or conservation programs to bring back 47 pelicans.  And that could be cheap or very, very expensive.   Helm has an elegant answer to the question of what a pelican is worth:  the price of a pelican is exactly one pelican.