Accessibility links
Lesson From LeBron: Be Good, But Not Too Good, At Your Job : Planet Money LeBron James fever helped the Miami Heat sell all season tickets, leading to the firing of all sales staff.

Lesson From LeBron: Be Good, But Not Too Good, At Your Job

Lesson From LeBron: Be Good, But Not Too Good, At Your Job 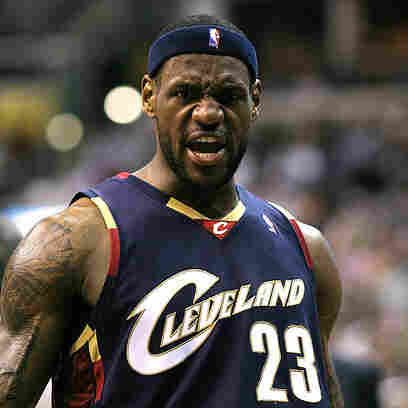 After selling all season tickets thanks to the fervor surrounding the arrival of star basketball player LeBron James, the sales staff of the Miami Heat got their reward Friday: a mass firing.

Thirty members of the sales team got the boot "because there was really nothing left to do anymore," a freshly fired staffer told the Miami Herald.

As a commenter on the blog marginalrevolution.com pointed out, it's a classic case of a machine displacing human labor-- but in this case the machine is James, who left the Cleveland Cavaliers.

New York Knicks sales staff might want to look out too, with their season tickets also being sold out. Single Knicks tickets will go on sale next month.

A Heat spokesperson said the team appreciated the sales staff's contributions to the company and has hired a placement firm to help them. They might also try calling Cleveland...

UPDATE: Chris Bosh tells thestreet.com he's into bonds, about 2:22 into this clip. He also says jewelry and cars are some of the worst things he's spent money on.