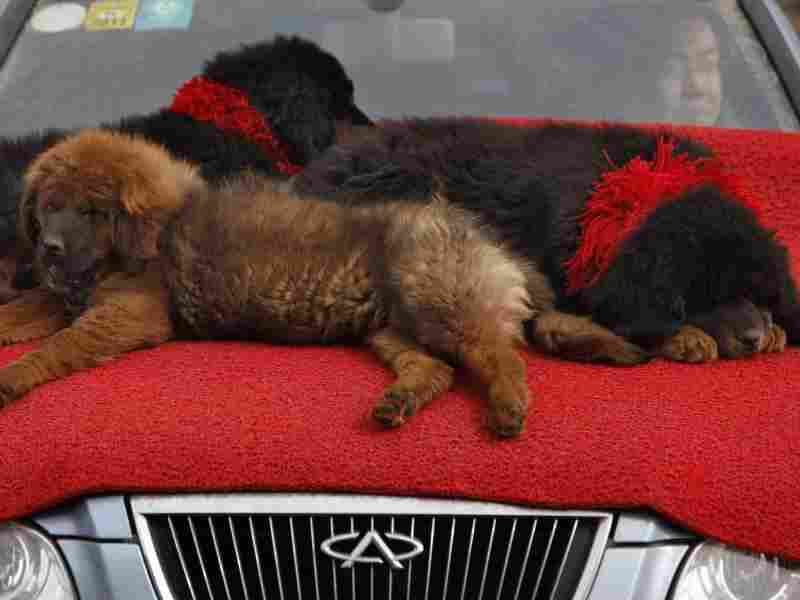 Tibetan mastiff puppies for sale lounge on the hood of a car outside a convention center in a northern suburb of Beijing. Gemunu Amarasinghe/AP hide caption

China's burgeoning millionaire class has found a new status symbol, and it doesn't come from a jeweler's or car dealer.

Dog licenses in many Chinese cities cost over $100, and the process to register a pooch can be quite cumbersome. In cities like Beijing, each dog must have photo ID, just like its human owner.

Birds and small animals such as crickets have traditionally served as pets in China. Until recently, most Chinese couldn't have afforded the upkeep associated with dogs.

Pet ownership was banned for years by the ruling Communist Party as bourgeois, and many people preferred to eat dogs and cats rather than keep them as pets-- and still do. A law to ban eating dog meat was proposed earlier this year, but even if it passes, many people expect it will be widely ignored.

MSNBC reports the allure of Tibetan mastiffs lies in their reputation as holy animals that provide blessings for home and security. Last year, a couple from Xi'an spent over $600,000 for a purebred called Yangtze River 2. They used a fleet of Rolls Royces to bring the pup home.