Accessibility links
Monopoly, A Dangerous Game? : Planet Money On today's podcast, we pit economists Daniel Hamermesh and Russ Roberts against our own Alex Blumberg and Robert Smith in a heavily edited game of Monopoly to find out what economic lessons the game has to offer. 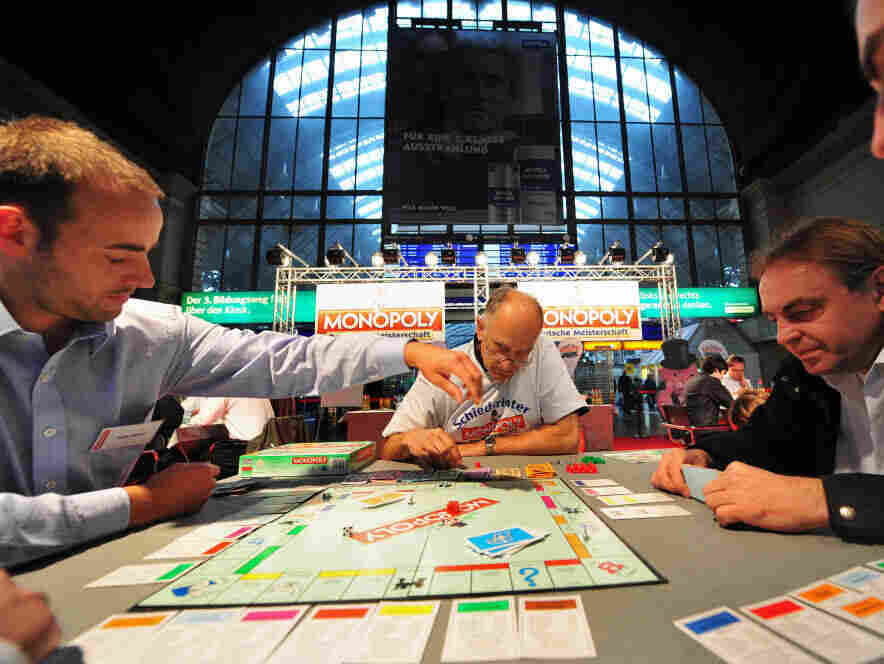 Who can forget the elation of buying their first hotel on a piece of pricey property, the joy of driving a younger sibling into bankruptcy, or the pain of having to make their first income tax payment?

I'm talking of course, about Monopoly. The classic board game many of us spent hours (and I mean hours) playing as children, whiling away hot summer afternoons and slow television nights.

Playing Monopoly is often one of a kid's earliest opportunities to manage their own "money" and learn basic economic concepts, and as such, it is frequently cited as an effective teaching tool. Daniel Hamermesh, professor of economics at the University of Texas at Austin , and a self-described "monopoly veteran," uses it at the college level to teach his intro economics classes about marginal benefit. He explains it this way, when you put the first 2 or 3 houses on a property in Monopoly, you get big increases in rent, but adding house number 4 and a hotel only bring dwindling returns. He's also got his own strategy for playing at home with his grandkids "the green properties are losers" and "never buy the utilities."

If Daniel Hamermesh is Monopoly's economist champion, Russ Roberts of George Mason University, is its economist defector. While Russ admits to playing as a child, these days he says the only time it's played in his house, is when he wants to teach his kids "how bad" its lessons are. In a 2006 Morning Edition commentary, Roberts said about the game "...only Marxists look at the world of capitalism the way the game of Monopoly does, as an unrelentingly gloomy system of exploitation where the rich eventually wear everyone else down."

On today's podcast, we pit Daniel Hamermesh and Russ Roberts against Alex Blumberg and Robert Smith in a heavily edited game of Monopoly to find out what lessons the game has to offer and who has the best strategy for winning.

And, we want to hear about your Monopoly experiences. Stop by our Facebook page to tell us what do and don't like about the game and how you would change it.

To hear more about Monopoly's economic roots, listen to this story from NPR's "Present At The Creation" series.