Accessibility links
Louisiana Fishermen May Get Bonus Payments for Their Catch : Planet Money Skyhigh prices for Gulf seafood may soon plummet, so Louisiana is trying to get BP to pay extra to fishermen in compensation.

Louisiana Fishermen May Get Bonus Payments for Their Catch

Louisiana Fishermen May Get Bonus Payments for Their Catch 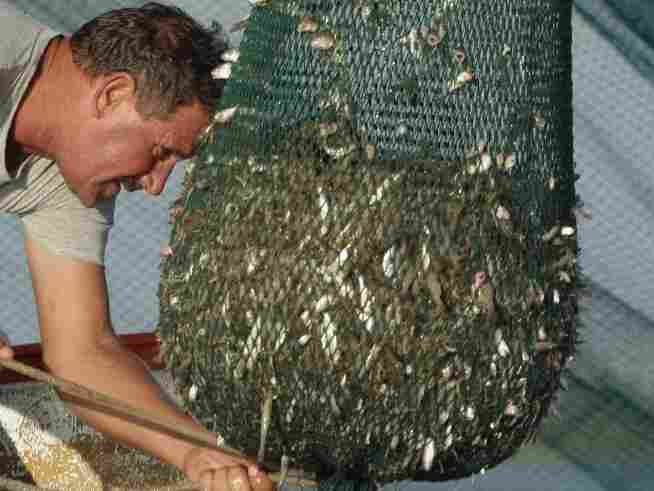 Louisiana has a plan to help encourage fishermen to go out and start catching seafood again: getting BP to pay the fishermen a bonus over market prices.

The plan, hatched last week by the Louisiana Seafood Promotion and Marketing Board, calls on BP to pay fishermen a premium over market prices. The thinking is that as Gulf waters open back up to fishermen, they will rush in, creating a glut of shrimp, crab, oyster and fish, which would lead to a big drop in prices.

The bonus amount would be 30% of the average price of the fish from last summer-- in other words, a fish that cost $10 a pound last summer would earn a fisherman an extra $3 a pound this year, no matter what he actually got from buyers at the docks. The program would run for three months and be capped at $30 million.

BP didn't respond to requests for comment about the plan. UPDATE: A spokesman for BP says the company is reviewing the proposal.

Economists aren't crazy about the idea. Prices "tend to find their balance whether you want them to or not," says Joseph Mason, an economist and finance professor at Louisiana State University. Temporary relief programs "tend to drive future crises down the road."

He sees the problem, though, acknowledging pretty much everybody along the Louisiana coast knows how to fish. Jobs on oil platforms aren't there, so workers will stream instead to fishing jobs. And plenty of boat owners will be looking for workers as oil-cleanup programs wind down and they redeploy their vessels to fishing.

Harlon Pearce, who chairs the seafood promotion board and thought up the incentive plan, says it's crucial to get fishermen back to work quickly and in a way that will reward them fairly. There's a whole subeconomy that depends on them, he says, ranging from trucking to ice production to tourism to processors.

Restaurants and markets want them back, too. Right now, prices for Gulf seafood are skyhigh. Al Mahler, who owns Big Al's in Houma, Louisiana, says compared to last summer, he's paying about 25% more for oysters and double for shrimp.

He's passing those costs along to customers, with the result that orders are way down. Instead, customers are sticking to lower-priced items like catfish, which he gets from farms, not the Gulf. And he had to close a second branch of his restaurant, in large part because the oilworkers who used to hang out there have disappeared.

Even if prices come down, fears about health issues surrounding Gulf seafood linger. But the promotion board's Pearce says they're unjustified. "We have a problem with brand, sure," he says. But since the oil spill, "our seafood is tested ten million times more. You know it's safe."