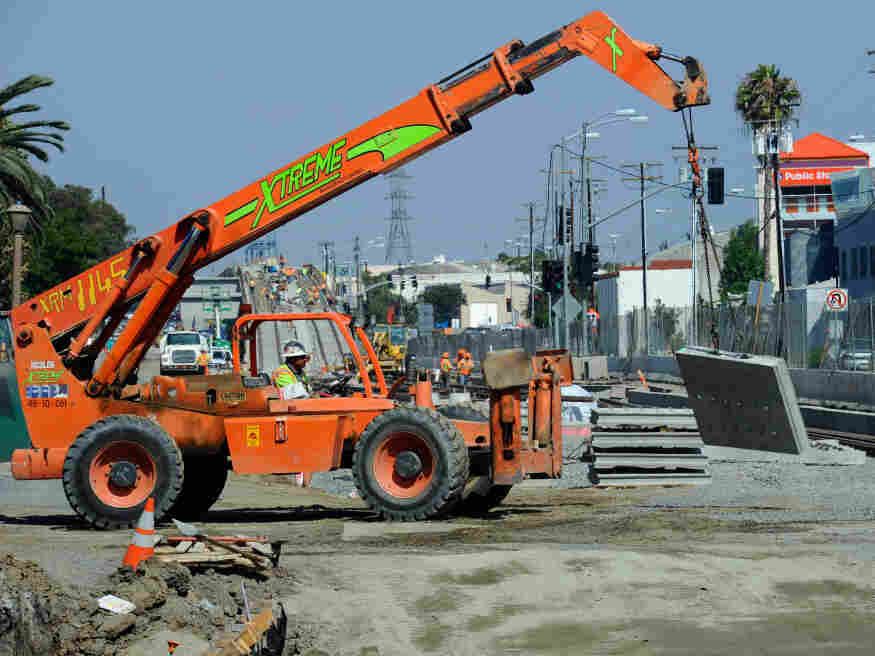 Construction workers at work on the Exposition Light Rail Transit Line that will connect downtown Los Angeles and Culver City. The money for the project is coming from the 3.7 billion in stimulus funds given to the state of California. Kevork Djansezian/Getty Images hide caption

Right at this very moment, you and I, and the rest of the country are participating in one of the great economics experiments of all time. An experiment to test whether John Maynard Keynes' prescription for how to get out of a global depression actually works. The Obama administration calls it the American Recovery and Reinvestment Act, you probably know it as the $787 billion stimulus package.

Keynes wrote about the idea of stimulus in his 1936 book, The General Theory of Employment, Interest and Money.

His theory simply put, was this — sometimes economies go into a recession and they can't get out, they get stuck in a kind of whirlpool and the best way to get them out is a swift kick by the government in the form of spending. The idea being that if the people aren't spending money, the government needs to borrow it from them and then spend it for them.

When the Obama administration first started kicking around the idea of a government stimulus, we talked to many economists who were skeptical. Tyler Cowen, of George Mason University, said "to spend a trillion dollars on an untested idea, in my view is a mistake."

During that conversation, Cowen suggested we check back in with him in a year-and-a-half. He said that if the economy had recovered in that time frame, he'd take that as "serious evidence" that his view of the stimulus was wrong.

Today on the podcast, we give Cowen a call to find out if he still considers the stimulus a "mistake." Plus, we use a computer model to simulate a world without stimulus.

Today's music: Silver Seas' "Help Is On The Way."