Accessibility links
Federal Reserve Mortgage Purchase Program : Planet Money In a matter of months, the Federal Reserve bought up a huge chunk of the nation's mortgages. Here's what it looked like on the inside. 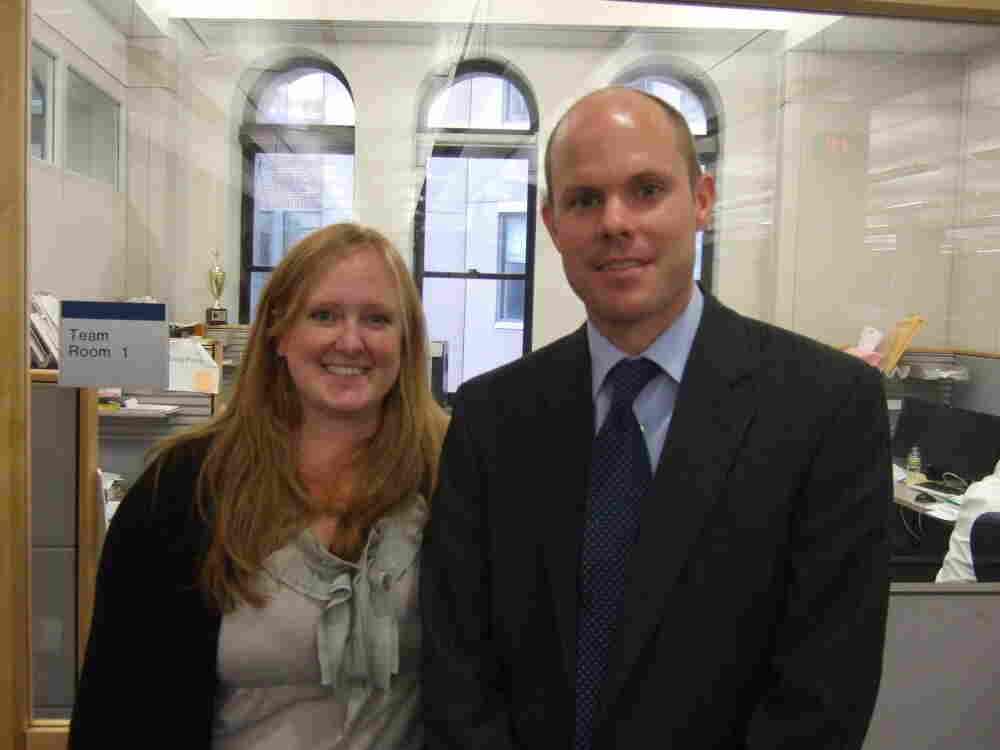 Julie Remache and Nathaniel Wuerffel, in front of the trading room. That's the table-tennis trophy in the background. David Kestenbaum/NPR hide caption

In the face of the financial crisis, the Federal Reserve decided to buy $1.25 trillion of mortgage-backed bonds as part of its effort to prop up the economy.

It was a huge departure from ordinary policy -- such an extraordinary departure, in fact, that it was easy to forget that somebody had to actually go out and buy all those mortgages.

This week, we visited the New York Fed to learn the story of how the central bank spent so much money, so fast.

In late 2008, Julie Remache got a call from her former employer, the New York Fed. She was working in the private sector, and the call came while she was at the office. She recognized the extension, and knew someone from the Fed was calling her. So she took the call in a conference room.

The guy on the other end of the phone was Richard Dzina, a senior VP at the New York Fed. His offer: Your job, should you choose to accept it, is to spend hundreds of billions of dollars and try to save the economy

"How could I say no?" Remache says.

The New York Fed is a big, fancy place -- lots of marble, a vault full of gold in the basement. But Remache and her team worked in a plain room with four small cubicles. There were no marble floors or oak tables. Just a Nerf football net, a table-tennis trophy, and two yoga balls.

The team spent six weeks coming up with a plan of attack, and 15 months actually buying mortgage-backed bonds, all of which came with a government guarantee that they’d be paid back even if the borrowers defaulted.

The program’s intent was to keep interest rates low, and slow the decline in housing prices. The team ended up buying more than a fifth of all of the government-backed bonds on the market.

"It's possible I was buying the mortgage on my own house," says Nathaniel Wuerffel. "Very possible."

The Fed was able to spend so much money so quickly because it has a unique power: It can create money out of thin air, whenever it decides to do so. So, Dzina explains, the mortgage team would decide to buy a bond, they’d push a button on the computer -- "and voila, money is created."

The thing about bonds, of course, is that people pay them back. So that $1.25 trillion in mortgage bonds will shrink over time, as they get repaid. Earlier this month, the Fed announced that it will use the proceeds from the mortgage bonds to buy Treasury bonds -- essentially keeping all that newly created money in circulation.

The decision was a sign that the Fed thinks the economy still needs to be propped up with extraordinary measures. More clues about what the Fed may do next could come Friday, when Ben Bernanke is scheduled to address a big annual meeting of central bankers in Jackson Hole.