Accessibility links
Study: Cash For Clunkers Was A Wash : Planet Money The program didn't bring any new buyers into the market, a study found. But it encouraged people who would have bought a car anyway to make a purchase a few months sooner. 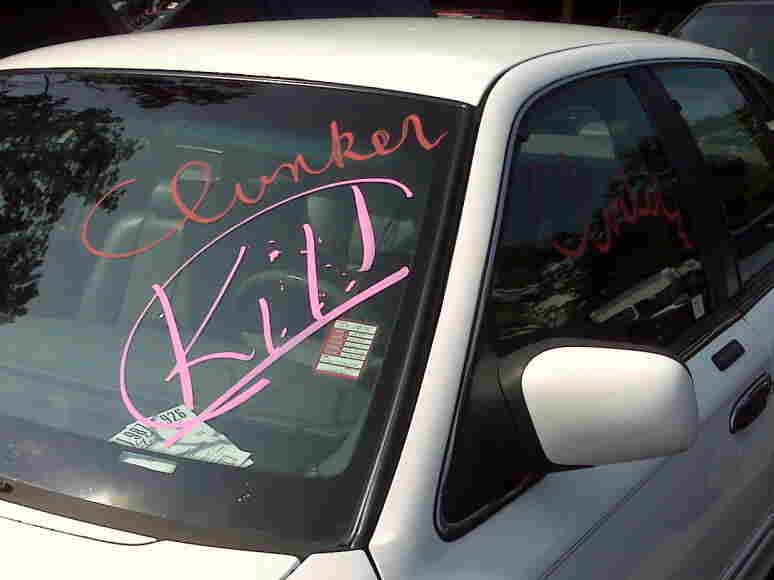 The government's "cash for clunkers" program boosted auto sales by 360,000 during the two months it was in place, according to a new study.

But in the seven months that followed, sales were down by 360,000 compared with what they would have been without the program, the study found.

The implication: The program didn't bring new buyers into the market. But it encouraged people who would have bought a car anyway to make their purchase a few months sooner.

Under the program, the government paid people about $4,000 to trade in old cars for newer, more fuel efficient ones. The idea was to both stimulate the economy by driving up auto purchases, and to improve the efficiency of all cars on the road.

Since the program ended last year, there has been endless debate about whether it brought new buyers into the market.

Christopher Carroll, a Johns Hopkins economist who until last month was a member of President Obama's Council of Economic Advisers, said he wasn't convinced by the new study.

He cited a survey that found that cash for clunkers persuaded people to buy a new car two or three years earlier than they would have otherwise.

The only way to answer the question definitively would be to find a parallel universe exactly like ours, except for one thing: no cash for clunkers program.

The economists behind the new study -- Amir Sufi of the University of Chicago and Atif Mian of the University of California, Berkeley -- think they found a passable substitute for a parallel universe: parts of the U.S. where, for one reason or another, there were almost no clunkers on the road when the program took effect.

By comparing sales in those areas to sales in more clunker-rich parts of the country, they were able to estimate the program's effects.

Their paper does not make an explicit argument for or against the program.

"You could argue that if you're in the depths of a really bad recession,  maybe shifting purchases of automobiles by even a couple months, maybe that's a useful thing to do," Sufi says.

"But," he adds, "I think it's incredibly important for policymakers to understand that whenever you induce the purchase of any good -- whether it be homes, whether it be a washing machine -- you are in some sense stealing those purchases from the very near future."