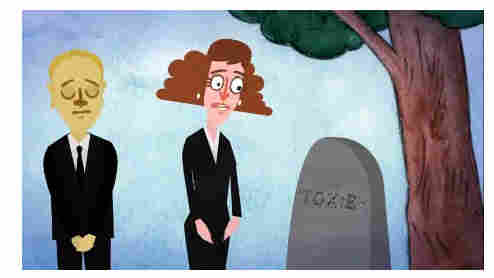 We are gathered here to day to commemorate the passing of Toxie, Planet Money's toxic asset.

The first to speak will be Wit Solberg, the investor who helped us buy Toxie. Wit also invested in Toxie — and, like us, he lost more than half his investment.

Good riddance, Toxie. You showed promise to begin. You had all the potential. I mean, our friends bought you for $1,000 and you had the potential to make them $75,000. At least you could have given them $1,000. ... I look forward to having the dirt pushed on top of your little grave. And may it be very thick dirt.

Next up is Samir Noriega, an analyst who served as Toxie's doctor. He was the first to diagnose Toxie back in April and to name the cause of death this week: home loan modifications. In other words, lenders helping homeowners out and forgiving debt.

Toxie will be sorely missed by all who knew her well... Unfortunately when I first saw toxie back in April, the prognosis was not a good one. Unfortunately, it's a very devastating disease that attacks victims very quickly.

Our last speaker will be Michael Braga, a reporter who helped us find the people whose mortgages wound up in Toxie:

The NPR reporters felt the people in Toxie would largely be homeowners who had lost their jobs, been unable to pay for their mortgages. But what they found when they came down here was that Toxie also contained people who ... who bent the law, broke the law, in order to get mortgages. And then walked away from those mortgages.

Yeah. That was a surprise when we found one of the mortgages in Toxie was listed in an FBI affidavit. Thank you Michael for your words.

Toxie will be missed. She is survived by countless other toxic assets still sitting on the balance sheets of banks, pension funds and other investors around the world.

Finally, thank you to those listeners who sent their eulogies. Here's a sampling of the messages we received.

There once was an asset — Toxie

She grew and grew with much moxie

Her bad innards then burst

All we got was the worst

Toxie was not a great bond; she wasn't wasn't even a good bond, but man... was she fun, or what?

While you may have passed, we will always remember you on our family trips to Florida.

We probably could have guessed it, the signs were all there, but our eyes were not ready to see what now seems so obvious. ... As we say goodbye one final time, we thank you for all you have taught us.