Accessibility links
Home Prices Held Their Ground. Again. : Planet Money For months now, the Case-Shiller index has crept upward, even as other housing indicators have painted a more gloomy picture. 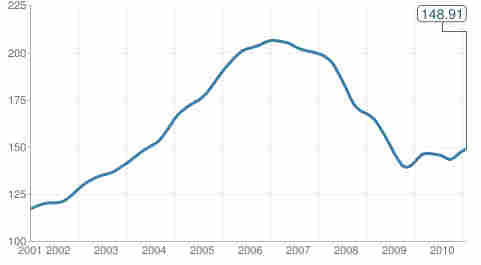 In the Case-Shiller index, the median home price in January, 2000 is equal to 100. The index isn't adjusted for inflation. Alyson Hurt/NPR hide caption

For months now, the Case-Shiller index -- the most important measure of U.S. home prices -- has crept upward, even as other housing indicators have painted a more gloomy picture.

And every month, when the numbers come out, everybody says, basically, "Don't expect this to continue."

Home prices rose by 0.6 percent between June and July, and by 3.2 percent from the previous year year, according to the Case-Shiller numbers released this morning. But analysts suggested those gains aren't likely to continue.

In a release this morning from Standard & Poor's, which puts out Case-Shiller, a senior S&P guy said:

The next few months may give us an idea of the true strength of the housing market, as the temporary economic stimuli will have ended. Housing starts, sales and inventory data reported for August do not show signs of a robust market, and foreclosures continue.

As these comments suggest, Case-Shiller lags other indicators.

So, for example, we already have data on how many homes were sold in August, and how many were on the market -- and those figures show that there's a glut of unsold homes, which is likely to push prices down. Millions of homes may be foreclosed on in the next few years, adding to the glut.

What's more, Case-Shiller uses a three-month rolling average. So the July number actually includes data from May and June, when the housing market was a bit stronger.

And home prices tend to be sticky: Lots of people want to sell their houses, but are in no hurry to do so. So they wait to see if they get a sweet offer. This can slow declines in home prices.

But, as the S&P official said in this morning's release, "anyone looking for home price to return to the lofty 2005-2006 might be disappointed."

Wonky Note: The 0.6 percent figure cited in the post is the non-seasonally adjusted number, which is the one S&P emphasizes. But there is also a seasonally adjusted version; that one actually showed a tiny decline, of 0.1 percent, between June and July.