Accessibility links
Life On The Installment Plan : Planet Money How Brazilians are learning to love credit.

Life On The Installment Plan

Life On The Installment Plan 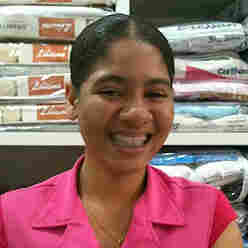 I met a 19 year-old girl in a mall in São Paulo who had financed nearly every item she was wearing.

Célia de Resende paid for her red t-shirt in 3 monthly installments.  Her sneakers were on a six-installment plan.  She couldn’t remember how many more payments she owed on her black pants but she’s sure they were bought on credit.

This is the way Brazilians now shop.  Consumer credit is a brand new concept and it’s wildly popular.  Three Brazilian banks are among the world’s top 10 credit card issuers.

Until about 20 years ago Brazil suffered from chronic high inflation.  There was no such thing credit cards.  People spent their money as soon as they earned it and not a single shop would take an I.O.U. on payment.

Today Célia is animated ticking off the list of items she can purchase on installment plans.  Then again, she also just got her first job.  Even with installments plans you still eventually have to pay for the stuff.

For more: Listen to our podcast on how four friends saved the Brazilian economy from high inflation.