Accessibility links
How Fake Money Saved Brazil : Planet Money An economist and his grad-school buddies tricked the people of Brazil into saving the country's economy. 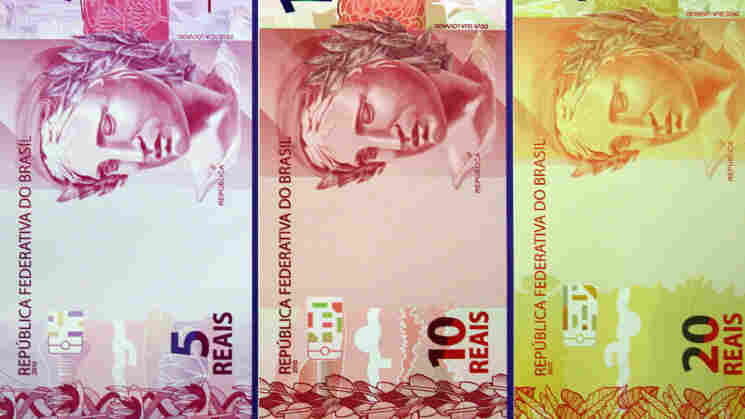 This is a story about how an economist and his buddies tricked the people of Brazil into saving the country from rampant inflation. They had a crazy, unlikely plan, and it worked.

In practice, this meant stores had to change their prices every day. The guy in the grocery store would walk the aisles putting new price stickers on the food. Shoppers would run ahead of him, so they could buy their food at the previous day’s price.

The problem went back to the 1950s, when the government printed money to build a new capital in Brasilia.  By the 1980s, the inflation pattern was in place.

1. New President comes in with a new plan.
2. President freezes prices and/or bank accounts.
3. President fails.
4. President gets voted out or impeached.
5. Repeat.

The plans succeeded at only one thing: Convincing every Brazilian the government was helpless to control inflation.

There was one more option that no one knew about.  It was dreamed up by four guys at the Catholic University in Rio. The only reason they enter the picture now  --  or ever -- is because in 1992,  there happened to be a new finance minister who knew nothing about economics.  So the minister called Edmar Bacha, the economist who is the hero of our story.

"He said, 'Well, I've just been named the finance minister. You know I don’t know economics, so please come to meet me in Brasilia tomorrow,' " Bacha recalls. "I was terrified."

Bacha had been waiting for decades for this call.

He and three friends had been studying Brazilian inflation since they were graduate students -- four guys at the campus bar complaining to each other about how no one else knew how to fix this.  And now they were being told "Fine, do it your way."

Bacha was invited to meet the president.

"I asked for an autograph for my kids," Bacha says. So the president wrote Bacha's kids a note that said, "Please tell your father to work fast for the benefit of the country."

The four friends set about explaining their idea.  You have to slow down the creation of money, they explained. But, just as important, you have to stabilize people's faith in money itself.  People have to be tricked into thinking money will hold its value.

The four economists wanted to create a new currency that was stable, dependable and trustworthy.  The only catch: This currency would not be real.  No coins, no bills.  It was fake.

The idea was that people would start thinking in URVs -- and stop expecting prices to always go up.

"We didn't understand what it was," says Maria Leopoldina Bierrenbach, a housewife from Sao Paulo. "I used to say it was a fantasy, because it was not real."

Still, people used URVs. And after a few months, they began to see that prices in URVs were stable. Once that happened, Bacha and his buddies could declare that the virtual currency would become the country’s actual currency. It would be called the real.

"Everyone is going to receive from now on their wages, and pay for all the prices, in the new currency, which is the real," Bacha says. "That is the trick."

The day they launched the real, Bacha says, a journalist friend asked him, "Professor, do you swear that inflation will end tomorrow?"

And, basically, inflation did end, and the country's economy turned around. In the years that followed, Brazil became a major exporter, and 20 million people rose out of poverty.

"We were in awe," Bierrenbach says. "Everybody was very happy."

Correction:  An earlier version of this story misspelled cruzeiro in two instances.  Thanks to the commenter who pointed out the error.