Accessibility links
When Buying Flip-Flops Is A Hard Call : Planet Money A chemistry grad student who grew up poor talks about how money works in his life.

When Buying Flip-Flops Is A Hard Call

When Buying Flip-Flops Is A Hard Call

Diogenes Placencia grew up in public housing in New York City. His family was on food stamps, and he lived for a time in a single-room apartment with 20 people. 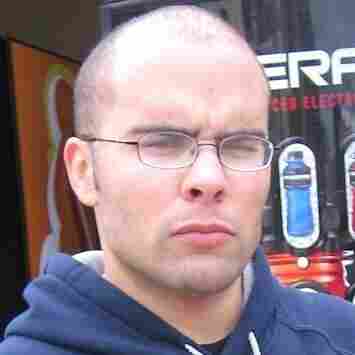 Now he's 27, and he's on track to receive a Ph.D. in chemistry next spring from the University of Arizona.

Diogenes wrote to us after listening to our story about Edith Calzado and her 10-year-old son, Sammy, who live in New York on $16,000 a year. "I was that kid back in 1992," Diogenes said.

We've been asking lots of different people questions about how money works in their lives. (Other entries in this series: Arianna Huffington, a nanny, and Stuart Murdoch of Belle & Sebastian.)

We asked Diogenes if he'd be willing to talk about money, and he was good enough to oblige us.

Do you worry about money?

Constantly. I worry mostly about my mother. I worry about providing for her when she gets older, and giving her some good years.

Are there any recent purchases you regret?

I really don't regret anything, because I put everything through such a rigorous process of whether I should get it or not. I do a cost-benefit analysis.

So what was the last purchase you put through this process?

It was an arm-band for my iPod. I swear it was like $15, and I looked at it for two months.

What's the next thing you're going to buy?

A pair of flip-flops.

You've lived in Arizona for five years and you don't have flip-flops?

Coming from the Bronx, you'd always get into fights. So when I wear flip-flops, I feel vulnerable. It's completely irrational.

Have you gone shopping for flip-flops?

Anything where you say, "I wish I had bought that?"

Probably only fine cheeses. That's the only time -- food.

Are you saving up for anything right now?

With our graduate-student salaries, there's hardly anything I can save.

Are you in debt?

What kind of job do you want to get when you finish grad school?

The fallback would be something in the semiconductor industry. I got an offer from Intel. It was a nice offer, but I didn't take it.

When I told my family that I rejected that job, they were like, "What are you, insane?"

There's a bunch of government labs around the country that do the type of research that I do. That's where I want to end up -- doing research for the government.