Accessibility links
Ireland Went Down With Its Banks. Why Didn't That Happen In The U.S.? : Planet Money In the U.S., the banks have made a strong comeback. In Ireland, the banks have driven the nation to the brink of bankruptcy.

Ireland Went Down With Its Banks. Why Didn't That Happen In The U.S.?

Ireland Went Down With Its Banks. Why Didn't That Happen In The U.S.?

Ireland and the U.S. both bailed out their banks during the heat of the financial crisis.

In the U.S., the banks have made a strong comeback, and the government has been paid back for a big chunk of the bailout. In Ireland, the banks have driven the nation to the brink of bankruptcy.

Irish banks were in much worse shape than U.S. banks, and they were much bigger relative to the overall economy.

This chart shows the astonishing amount of risk that Ireland took on when it guaranteed its banks. 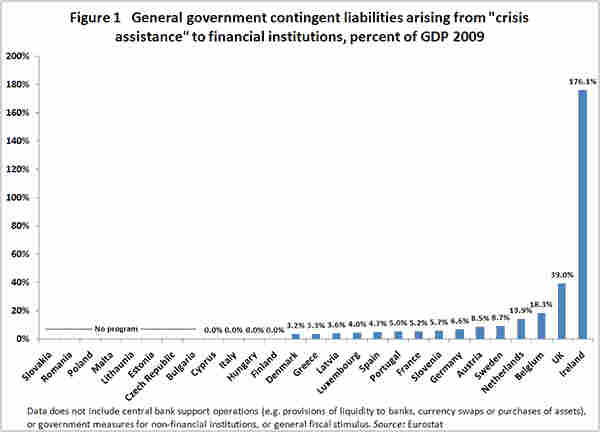 The U.S. isn't on the chart, which is based on EU data. But Jacob Funk Kierkegaard, the Peterson Institute fellow who put the chart together, told me that the U.S. would be somewhere to the left of the U.K. Roughly speaking, the U.S. was on the hook for somewhere around 10 percent of GDP, Kierkegaard said.

"We're not talking about getting even close to Ireland, or, for that matter, close to the U.K.," he said.

What's more, during the boom, home prices rose even more in Ireland than they did in the U.S. So prices also have further to fall, which means more trouble for Irish banks.

Ireland has been able to avoid a bailout until now only because it's a sovereign nation with the implicit backing of the EU, which has made it easier for the country to borrow money.

"If this had been a state government regional bank, they would have gone bust already," Kierkegaard said.