Accessibility links
How Ireland's Bank Bailout Shook The World : Planet Money Ireland's 2008 decision to help its banks wound up inspiring bailouts throughout Europe and the U.S. So why is Ireland the only country in urgent need of a rescue? 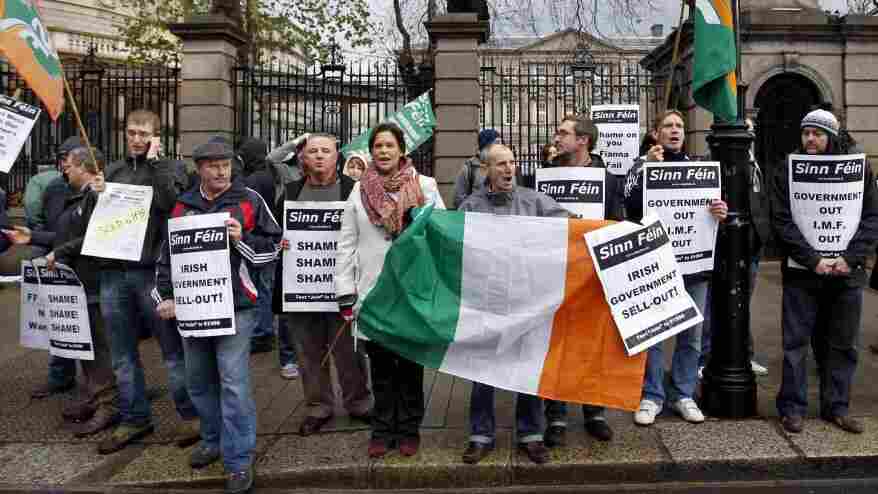 When the Irish government decided in 2008 to bail out the nation's banks, the country started down the slope to fiscal ruin.

But the decision also had a much broader effect: It wound up inspiring bank bailouts throughout Europe and the U.S.

Ireland was the first country to bail out its banks during the 2008 crisis. The move prompted investors to begin moving their money out of other European banks and into Irish banks.

So, less than a month after Ireland guaranteed its banks, the U.K. followed suit. Germany was next.

"Funds were moving from countries like Germany or France to Ireland because depositors were thinking, 'Well, there my funds are safe,' " says Sebastian Dullien, economics professor from University of Applied Sciences in Berlin. "The German government was thinking, 'What can we do now?' And what they did was promise to guarantee all private bank deposits in German banks.' "

Those moves, in turn, prompted the European Union to raise bank guarantees for all E.U. countries, and to put more capital into the banks.

Soon after that, for a variety of reasons, the U.S. got into the bailout business, too. MIT economist Simon Johnson explains the link:

But, Johnson says, there was a key difference between the Irish bailout and the bailouts in the U.S. and other countries. The Irish basically guaranteed everything -- not only savings and checking accounts, but also the bonds that banks sold to investors.

"The United States did not extend a blanket guarantee," Johnson says. "That was smart."

What’s more, the Irish banks were much bigger relative to the nation's overall economy than banks in the U.S.

"They were too big to save," Johnson says.