Accessibility links
Fewer Americans Pay For Cable TV : Planet Money Cable companies say it's because the economy is bad. But some viewers now watch over the Internet, and they won't be back.

The number of people who pay for TV is falling for the first time, according to research firm SNL Kagan.

But the numbers by region are pretty interesting. As this map from the WSJ shows, the number of subscribers didn't fall everywhere. 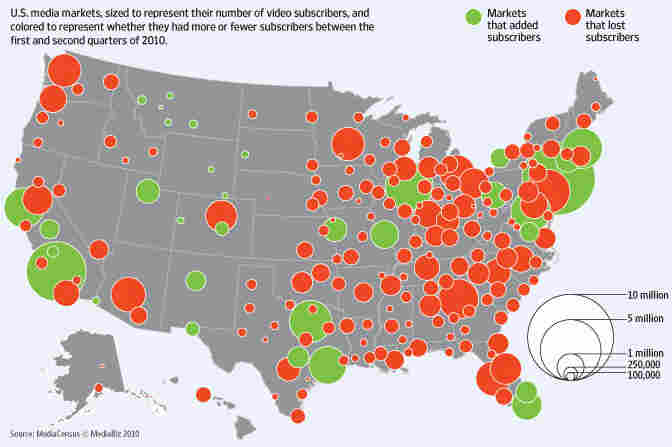 The biggest markets actually saw a growth in the number of people who pay for TV from cable companies, phone companies or satellite services. But there was a decline almost everywhere else, driven by a big falloff in the number of cable subscribers.

It's unclear what exactly is going on here. The cable companies suggest that people are cutting back because of the bad economy -- which implies that they'll come back when the economy gets back into shape.

But, as the Hollywood Reporter notes, at least some of the decline is due to people who are canceling their TV subscription and watching TV over the Internet -- and those people aren't coming back.