Accessibility links
Small Banks Are Still In Trouble : Planet Money The number of "problem banks" keeps rising. But the banks on the list are small.

Small Banks Are Still In Trouble

Small Banks Are Still In Trouble

Big U.S. banks are coming back, and the banking system as a whole is slowly getting healthier. But lots of small banks are still in trouble.

That's the gist of the FDIC's latest report. Eighty-one percent of banks were profitable in the third quarter -- the highest percentage since the middle of 2008, before Lehman went bust and everything fell apart.

But the number of banks on the FDIC's "problem bank" list continued to rise -- to 860, the highest number since the early 1990s. 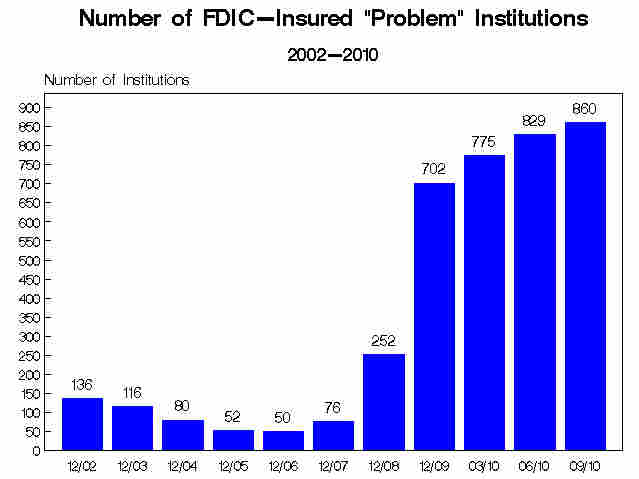 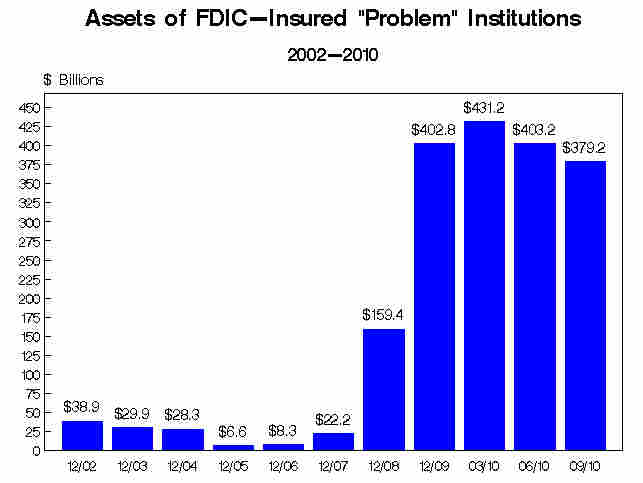 This chart shows that the total assets of banks on the list is still high, relative to pre-crisis levels. But the figure has been falling this year. What's more, combining this chart with the previous one, we can determine that the average bank on the problem list has assets of $441 million.

The nation's three biggest banks, by comparison, have assets of about $2 trillion each. In other words, each of the nation's biggest banks -- Bank of America, JPMorgan Chase, Citigroup -- is more than 4,000 times as big as the average bank on the problem bank list.

Small banks, by their nature, tend to be heavily exposed to local real estate markets. So it's likely that the banks on the problem list are clustered largely in parts of the country that were particularly hard hit by the housing bust.

For more: Listen to the All Things Considered story on the FDIC report.